The next big bust coming from cheap credit

I came across an interesting real estate deal the other day here in Manila. It was for a tiny, one bedroom condo of 45 square meters (just under 500 square feet). The building is under construction and isn’t -scheduled- for completion until late 2012 or early 2013. Asking price? Approximately $117,000 USD.

Now… depending on where you live, you may find this shockingly cheap. But at $2,600 per square meter for pre-construction pricing, I find this shockingly expensive, at least for the Philippines. This is the kind of place where you can still live on $10/day and buy some beachfront property in the boonies for a song.

The issue here is that interest rates here are at all time lows. Mortgage rates are as low as 5.5% (versus the historical average in the mid-teens). 3-month Philippine government bonds were yielding well under 1 percent last week. It’s a joke.

Because there’s so much cheap money available, there is a massive building boom going on in Manila. Within a 1-mile radius of where I live in the Makati central business district, for instance, there are at least 7 residential buildings under construction as high as 75 floors or more. 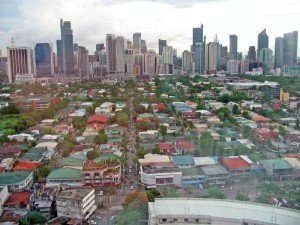 This is literally thousands of units set to house many more thousands of people, all within just a small space in Manila. There are similar construction booms all over town. So has the population of Manila really spiked such that the underlying demographics support all the new housing supply? No.

Moreover, has the population of ‘wealthy’ people increased to the point that tens of thousands of Filipinos can now afford to live in prime Manila property? Definitely not. This is still a poor country.

Funny thing is that most of the buyers have no intention of living there once the building is finished. They’re hoping to flip their contract to another buyer at a higher price before the construction is complete. It’s the same game that was played out in Florida a few years ago, almost as if they’re following a script.

Ultimately, both the supply and demand for these units is artificial, based on ridiculously low interest rates as opposed to solid demographic fundamentals and the needs of the market. This is what cheap credit does– it causes the market to cease functioning.

Like all credit-fuelled booms, this too shall bust. I’ve lived in Manila long enough now to have seen a complete property cycle. After the last boom, which went spectacularly bust in 1997 with the onset of the Asian financial crisis, prices dropped by as much as 70 percent in US dollar terms from peak to trough.

Many of the new buildings completed in that cycle have only now, over a decade later, recovered to their 1990s price levels. I expect the same thing to happen again– massive price drops over the next few years as this credit boom fizzles out.

Of course, I’m very much in the minority. Most people only feel comfortable buying when everyone else is. They like to be part of the crowd. Unfortunately, that means most people will be burned again when the flow of artificially cheap credit shuts off. After all, Manila is not the US or EU– the central bank cannot print without limit or impunity.

Aside from the obvious implications of staying away from the Manila real estate market right now, this should be a strong lesson for anyone who still thinks that cheap interest rates and fiscal stimulus programs are healthy for economic growth.

They don’t. Rather, cheap money simply encourages irrational behavior and leads to huge misallocations of labor and capital. If you’re a contrarian, look where the cheap, newly printed money is concentrating and stay away, whether it’s Manila real estate or US Treasuries.

If you want to make money on the insanity, short the bubble. Given that 10-year yields have reached historic lows, Simon will have more on this soon.