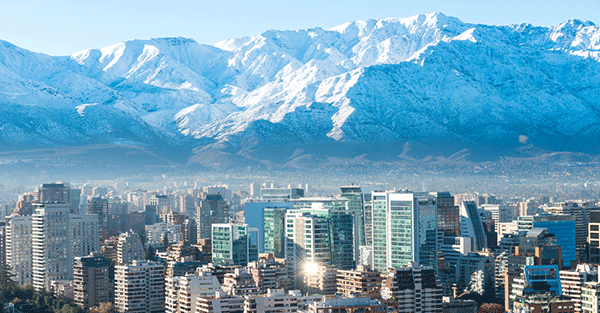 A few days ago I was having lunch with some executives who run one of the largest fruit companies in the world.

The company is Chilean, and as the guys are all local, they were curious about my take on Chile as a foreigner.

I told them that Chile is far from perfect. But there’s one very special reason why I spend so much time here.

It’s not some cliché that Chile is the most beautiful place in the world.

If there’s one thing that I’ve learned in traveling to 116 countries across all 7 continents, it’s that there are countless beautiful places in the world.

Chile is certainly one of them.

In the north of Chile lies the driest desert in the world with its absolutely majestic night skies.

I’ve been to some of the darkest jungles in the middle of nowhere in Africa, where the stars pale in comparison to northern Chile.

All of this is part of the same country.

What makes Chile so special is not its exceptional climate either.

This is climate classification is exceedingly rare and only exists in a handful of countries in the world.

Nor is the best thing about Chile the favorable lifestyle and abundant opportunities here.

The cost of living is reasonable, and Santiago in particular is quite safe, modern, and advanced.

From my flat in Santiago, it’s roughly an hour’s drive to both the ski slopes and the Pacific Ocean.

Chile is rapidly becoming a high-income nation; there’s a robust and growing middle-class with lots of disposable income. Yet at the same time there’s a noticeable shortage of many high quality products and services.

You’d be amazed that even something as simple as a high-quality restaurant could be pretty innovative down here.

But while all of those aspects of Chile are really nice, there’s one more thing that makes this place really special:

This is the easiest place on the planet to obtain residency for any nationality. And as an entrepreneur, this is an unparalleled benefit.

You can form a local business here in a day. And with your new company, the first 25 employees can all be foreigners.

If you want to open an Indian restaurant for example, you could easily bring five or six chefs directly from India.

If you want top-quality Spanish-speaking servers, you can bring another group from Cancún or Nicaragua.

Or say you’re running an IT business and want to bring a team of programmers from Russia– you can do that too.

And the process of obtaining legal residency for them is incredibly simple and cost effective.

I’ve done it myself– we have people here from all over the world working at our various businesses.

I relish the freedom to hire the best people in the world as opposed to having to hire people that some government regulation force me to choose from.

Being completely unconstrained by the local labor market means that I’m not being held back by talent.

Whether you’re an entrepreneur and investor, or a foreigner looking for a nice, safe place to live, this is a huge benefit.

And here in Chile is the only place in the world where it’s so incredibly simple.