This free country should be on your radar… 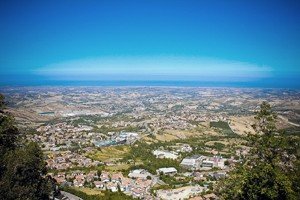 They call it “The Most Serene Republic of San Marino”. That’s actually the official name. And with good reason… because it’s easily one of the most ideal places on the planet to be.

Perched atop limestone cliffs overlooking the Adriatic coastline, San Marino is the oldest surviving sovereign state in the world. It was founded in 301 by a Christian stoneworker from Dalmatia (modern-day Croatia) who was fleeing persecution under Diocletian.

The country remains to this day, in many ways, the same bastion of political and economic refuge that it was nearly 2,000 years ago.

Tax rates are comparatively low. Regulation is limited. The government is tiny. San Marino has a long history of budget surpluses and zero debt.

It is no coincidence that this diminutive nation boasts among the highest per-capita GDP, greatest wealth, lowest unemployment, and highest life expectancy in the world.

To boot, San Marino is also gorgeous, safe, clean, friendly, and shockingly inexpensive. The weather is near-perfect with plentiful Mediterranean sunshine, yet you’re an easy drive to the Italian Alps.

It’s also a place where you feel very free. You don’t see legions of jackbooted thugs wandering around town toting automatic weapons at the ready. There are no agents of the government shutting down lemonade stands, fondling travelers, wiretapping phone calls, conducting UAV reconnaissance of citizens, etc.

In San Marino, people peacefully coexist in a beautiful, quintessentially Italian setting. Everyone is expected to act like a grownup and be responsible for themselves without the state intervening.

(On that note, I should also mention that San Marino has some of the freest, most unrestricted gun laws in Europe…)

It’s no accident that the nation is so prosperous; there is a direct link between freedom and economic prosperity. One is fuel for the other, like oxygen to fire. Smother the oxygen, and the fire goes out.

Zimbabwe is a great example of the fire going out; once a clean and prosperous nation, its fortunes turned quickly after a few years of rule under Robert Mugabe’s dictatorial control.

Medieval Venice is another great example; the city-state was the epicenter of European prosperity for hundreds of years due to the economic freedom provided to its citizens. As these freedoms began to wane in the 14th century, so did the economy, until nearly all the
wealth and productive class moved on to Florence.

There’s no secret sauce to achieving prosperity, it’s not rocket science. Nations must produce more than they consume, and in order for that to happen, people need freedom.

Freedom is highly prized in San Marino. Temporarily ruled by fascists during World War II, San Marino declared a national holiday once they were driven from power. They still commemorate the occasion to this day.

No doubt, freedom and opportunity are in decline in many parts of the world. Countries that already have shaky economic fundamentals are hitting the accelerator, spending their way to the bottom as quickly as possible.

San Marino is one of the bright spots out there… and it definitely ought to be on your radar.