This place is the Austin, Texas of South America 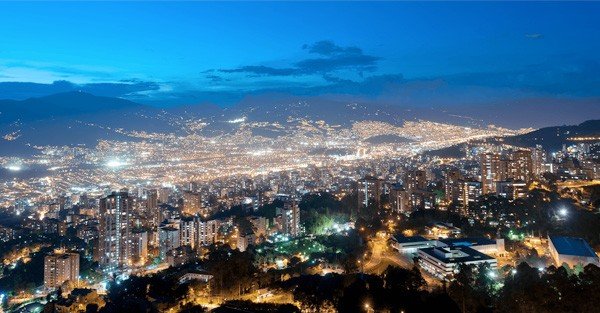 What an amazing weekend.

We just finished up a wonderful event here in Medellin for members of our Total Access group.

(Total Access is the highest level of Sovereign Man membership, and we routinely hold trips like this to introduce members to business and investment opportunities all over the world, and to the interesting, influential people within our network.)

As an example, we started on Thursday night with a reception for our members attended by prominent Colombian business executives, politicians, and artists.

Then Friday morning we kicked off the formal program by addressing the elephant in the room.

As you’re likely aware, Colombia has been engaged in a civil war for several decades with communist revolutionary groups like the FARC.

This conflict produced a dangerous web of narcoterrorism, paramilitary crime rings, and appalling levels of violence.

20 years ago, Colombia had a well-deserved reputation as the most dangerous country in the world.

But that was then. Today is a dramatically different story.

Most notably, Colombia is very close to concluding a peace treaty with the FARC.

The Colombian government has sent five private citizens to Havana, Cuba to sit at the negotiation table with FARC leaders to iron out the remaining details.

One of those negotiators (who is also one of the most successful business leaders in Colombia) joined us this weekend in Medellin, so we were able to hear about what’s happening with the peace negotiations straight from the horse’s mouth.

His remarks on the peace process and Colombia’s past struggles were truly inspirational.

And while I’m not at liberty to put the details of what he told us in print, it’s clear that both sides truly want a lasting peace.

This has extraordinary implications for Colombia.

Hammering this point home, our next guest was legendary investor Jim Rogers, who flew in all the way from Singapore to join our group.

Jim is literally the only person I know who has traveled to more countries than I have.

And he has witnessed first hand how peace can fuel prosperity in a nation.

War isn’t profitable for anyone except defense contractors.

With peace, people can once again get back to the business of producing, saving, and investing with confidence. That’s what builds an economy.

This is already starting to happen in Colombia, and we expect much more growth in the coming years.

The real turning point was the administration of former President Alvaro Uribe who was able to successfully wind down major military operations against the FARC.

If the country is able to stay on track over the next decade, Colombia could become one of the greatest economic success stories of our time.

It’s also a really nice place to be.

I call it the Austin, Texas of South America.

And it’s dirt cheap, especially now as the US dollar is so overvalued.

Our members were all shocked at how cheap it was to eat out at Medellin’s many fantastic restaurants, and at the absurdly low cost of real estate.

Medellin’s property market, in fact, is still one of the cheapest in the world on a price-per-square meter basis.

One of our speakers, a foreign entrepreneur who has moved to Medellin, told the audience about his 5-bedroom, 3,500 square foot penthouse apartment in the nicest part of town that he bought for just over $200,000.

I’ve been coming to Medellin for years and it gets better every single time.

And yet the reputation lingers.

Colombia is still frequently derided today as a dangerous haven for narcoterrorism, kidnapping, and wanton murder.

We’re not going to wear rose-colored glasses: serious problems still exist. But it’s nothing compared to the old days.

As an investor, I always try to find places where there’s a huge difference between the ACTUAL risk and the PERCEIVED risk.

Most western banking systems are a great example.

As we often discuss in this letter, western banks are extremely illiquid and poorly capitalized.

Their insurance funds fail to meet the minimum requirements and are unable to bail out the system.

The governments that are supposed to back them up are themselves insolvent. And the central banks that support the entire system are insolvent on a mark-to-market basis.

Plus, many western governments have recently passed legislation allowing banks to steal customer deposits the next time they run into trouble.

Yet there’s very little concern out there about banks. In other words, the PERCEIVED risk, i.e. how risky people think the banks are, is much lower than the ACTUAL risk.

Anytime that’s the case, when the actual risk is HIGHER than the perceived risk, it’s time to get out.

Colombia is the opposite. The perceived risk is very high. People think this place is a death trap.

The actual risk is MUCH lower. And our members found that out this weekend when they toured the city and surrounding countryside.

Anytime the actual risk is LOWER than the perceived risk, it’s time to get in… because the crowd is going to be close behind you.

That’s the opportunity in Colombia, and why this place should be on your radar now. Because this vast disparity in risk perception won’t last.

I think Medellin and the surrounding area could be a really great place to retire, and I’m convinced it will be a major expat destination some day. It’s worth checking out as a Plan B option.

But given Colombia’s current tax structure and other major hassles, I would avoid buying real estate as a pure investment.

There are far, far better sectors to invest in with higher returns and greater tax efficiency. Premium members– stay tuned for more.