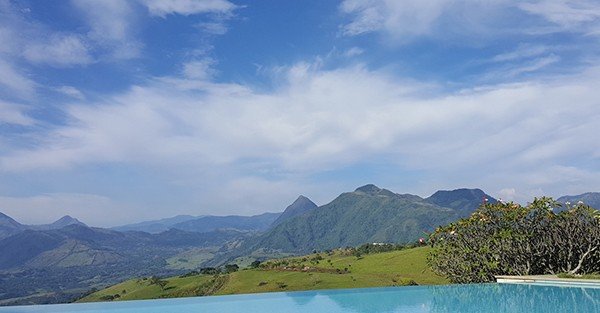 Roughly 100 kilometers outside of Medellin, Colombia’s second largest city, is a veritable paradise.

I spent an incredible weekend with some friends there, high up in the Andes riding horseback and exploring the quaint coffee villages of Colombia’s beautiful highlands.

It was amazing. The weather is just perfect. The high altitude at about 6,000+ feet keeps it cool, but it rarely gets cold… and never freezes.

It’s constantly warm, but seldom hot. So there’s absolutely no need for heating or air conditioning.

My friend’s stately home up in the mountains was entirely open air. And, shockingly, there were no bugs or annoying mosquito bites either.

It’s extremely sunny as well. There’s very little rainfall. Yet water is abundant in the region from multiple sources.

Combined with the dark volcanic soil, the agricultural diversity is nearly as substantial as California’s or central Chile’s, with the added benefit of a 365-day growing season.

We went to a nearby village and met local business owners and artisans; one was a shoemaker who produces genuine leather boots from scratch, custom-fit to your foot, for less than $40.

Another, larger town of 20,000+ inhabitants was so clean and polished, I thought it easily the nicest I had ever visited in my life.

Everything was so cheap. I bought a newly-made leather belt for a few bucks. Lunch was a delicious meat grill where you’d be hard-pressed to spend more than five dollars on an entrée.

The coffee afterwards at a local artisan café was a whopping 30 cents, and the décor so chic it could have been in Milan.

Overall it was an amazing experience. Yet despite how impressed I was with the region, the part that really excites me is how uncomfortable it was to get there.

You see, it was only 100 kilometers, or about 65 miles, from Medellin But the journey took nearly three hours. And it wasn’t pleasant.

Colombia is a vast country of more than 50 million inhabitants. Yet its “highway system” consists of zigzagging single-lane roads where you’re lucky to average 20 or 30 miles per hour.

It’s scarcely 300 kilometers from Medellin to the capital city of Bogota. The journey should take under three hours. Instead it takes eight.

This is the case with most of the infrastructure in Colombia.

There used to be a fantastic train network crossing all of Colombia’s major cities and economic zones. But it’s been entirely abandoned.

Mobile and Internet connectivity is basic.

Overall the country is very underdeveloped. And there’s good reason for it: Colombia has been at war for decades.

There was a bloody, ten-year civil war starting in 1948. Then there’s been a long, drawn-out conflict with Marxist guerillas since the 1960s.

Plus an incredibly violent fight with drug cartels that lasted for more than 25 years.

With so much chaos and violence in the country, investors ran away as quickly as they could.

And any major public works project was effectively dead in the water. They knew that if they built a new road, some paramilitary or guerilla group would blow it up.

So there has been very little investment in infrastructure as a result.

But that’s all changing now. Colombia has changed.

Crime is down dramatically. The drug conflicts have subsided. The FARC’s strength is down more than 80%, and they are currently negotiating a final peace treaty to end the war.

So the country is doubling down on massive infrastructure projects.

The new proposed roads have been dubbed ‘prosperity highways’, and construction has already begun.

There will be a vast network of modern highways crisscrossing the country, running from Colombia’s Pacific coast to its Caribbean coast, through all major towns and cities.

All of this investment is going to have a major benefit to the Colombian economy.

In addition to the domestic impact of tens of billions of dollars in infrastructure spending, the speed of business and logistics is going to improve dramatically.

And there will be so much more.

With peace comes more development. More hydroelectric projects (many of which are already underway) to improve the electrical grid.

I’ve seen the same thing in Myanmar, which is starting to emerge from decades of isolation.

Peace has a funny way of showering a country with prosperity.

And it’s going to make Colombia one of the most interesting places to be in the world in the coming years.