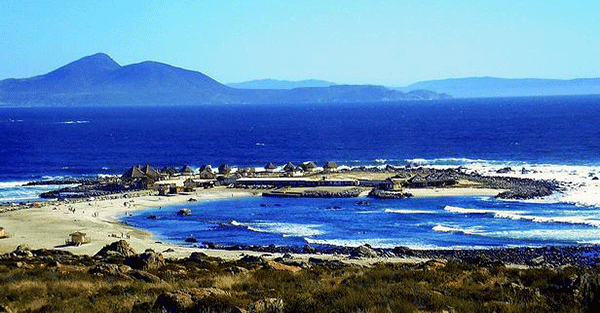 The night skies of northern Chile are among the clearest in the world. I’ve been astounded here every evening by the sheer beauty of more stars crowding the darkness than I have ever seen in my life… it’s something that just about every human being can appreciate.

La Serena is a thriving coastal town, a vacation hot-spot in Chile. It’s about an hour’s flight north of Santiago and the gateway to Valle de Elqui, a fertile agricultural region nestled in the mountains where I spent a long weekend.

The weather here is also spectacular with an eternal, spring-like climate… so you can imagine I was feeling more than a bit guilty when I called my parents in Texas to check in on them this morning— Texas is suffering horrendous cold weather right now, like much of the US, and my parents were huddled in bed with the dogs trying to stay warm.

Thing is, authorities have initiated rolling blackouts across the state because demand from so many people heating their homes at the same time has proven to be too much for the system to cope with. So now, community by community, they’re shutting the power down for up to 45 minutes, possibly longer if the weather doesn’t improve.

You know the system is in bad shape when you have to import electricity from Mexico in order to keep the lights on… but that’s exactly what’s happening. Mexico’s Federal Electricity Commission is riding in to save the day, transmitting nearly 300 MW across the border so that Texans don’t freeze.

Fortunately my folks are pack rats and have an abundance of blankets, food, and water stashed away… but these events do certainly illustrate how fragile the system is and how dependent most people are on things that they have no control over.

With world food prices surging to the highest level ever recorded, energy demand increasing by the day, and the world population growing by over 70 million each year, I think it’s definitely time to reduce system dependencies. There are essentially two ways to do this.

First is to become a member of the elite… fast. Jerry Jones, the billionaire owner of the serially disappointing Dallas Cowboys football team, was able to get his shiny new stadium exempted from the rolling blackouts because the 2011 Superbowl will be held there this coming weekend.

Simply put, if you’re a member of the elite (like Jones), you have power and influence with the people who control the system. Personally I don’t like this approach because the elite’s benefits are often gained by taking value from others; in this case, Jones’ stadium has power while my parents wait to be bailed out by the Mexicans.

Regardless, I would tell you that it’s a hell of a lot easier breaking in to these circles overseas; in smaller countries, you can gain access to the elite without being a billionaire. I wrote about this extensively last year in our free ‘Network Infiltration Report,’ which outlines some of the tactics that have been successful for me in the past.

More importantly, I think increasing one’s self-reliance is the better answer to reducing dependence on the system– this could mean a lot of things: having a second residence in a more stable place overseas; installing solar paneling; storing extra food and water; diversifying your business infrastructure; planting a garden, etc.

I’ve been very vocal about this lately because I believe that system disruptions, political turmoil, social strife, and economic uncertainty are all interconnected, and increasing one’s self-reliance is critical to cushioning the blow of whatever may come.

Those who remain completely dependent upon the system– the politicians for their economic financial opportunities, the big Ag companies for their food supplies, the bureaucrats in the utility commissions for their water and power– are quite vulnerable.

Worst case– even in the event that some miraculous solution should wipe away all the world’s political corruption, economic insolvencies, and resource shortages (which is entirely possible at some point in the future with more advanced technology), you won’t be any worse off for taking measured steps to become more self-reliant today.