What’s a young person supposed to do? 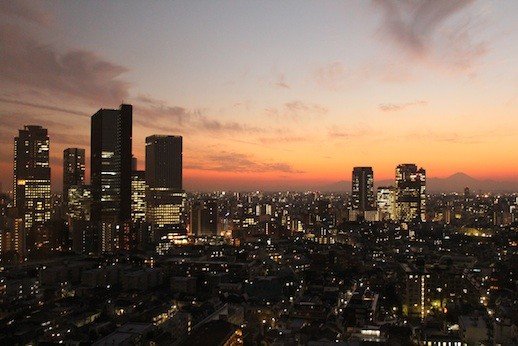 The view this evening in Tokyo's Shinjuku district; that's Mt. Fuji in the background.

I can’t begin to describe how excited I am to be visiting Tokyo while the Japanese yen is at its all-time, historic high. My timing couldn’t possibly be worse.

For reasons that are completely incomprehensible, the yen is still viewed as a stable ‘safe haven’ currency despite four completely hopeless black marks:

1) Japan’s public debt puts other bankrupt nations to shame. As a percentage of GDP (225%), Japan’s debt is more than twice as bad as the United States.

2) The political situation in Japan is anything BUT stable. Japan has blown through 6 prime ministers and 9 finance ministers since 2006. And every one of them was a failure.

3) Social demographics are a ticking time bomb. Both life expectancy AND average age in Japan are higher than just about anywhere else on the planet… and the country has neither the work force nor the financial resources to support the massive waves of retirees that are coming.

Despite these obvious headwinds, though, the market is telling us that Japan is the safe place to be right now. And as a result, prices here are just plain stupid.

I’ll have more to report on this next week, plus a boots on the ground perspective of what’s going on in Fukishima. Hopefully I won’t grow a sixth finger.

And without further ado, let’s move on to this week’s questions.

First, Elle asks, “Simon, I am a female senior in high school and am trying to figure out what to do next year. Since the future of America is unstable, what would you do if you were in my shoes?”

Young people in bankrupt western nations do not have a particularly bright future. To put it bluntly, society is going to force-feed you a shit sandwich. Higher taxes, more debt, fewer prospects, and a much lower standard of living await you. That’s if you stick around.

You probably won’t be surprised to hear me say this, but I think that young people ought to consider getting out of dodge. The world is a big place and it’s full of opportunities. Following the old way of ‘study hard, go to a good school, get a great job, and work your way up the ladder’ is completely dead.

Success today, whether it’s in a job or owning a business, is all about creating value– what can you do that’s so valuable to someone else that they’re actually willing to pay you for it?

When you’re in a developed country surrounded by hundreds of millions of people who share similar skills, it can be a bit competitive to do this. But if you take off for a developing country, you might be the only person in town who can do a number of things that might seem like second nature to you.

The great thing about being young is that you have nothing to lose and everything to gain. It’s the only time in your life that you won’t be saddled with other responsibilities.

As for WHERE to go? Part of it is a lifestyle choice… where do you want to be? But most of all, look where the growth is. Asia, Africa, Latin America. You’ll find a happy medium that strikes a balance between growth opportunities and your personal desires.

I wrote about Mongolia last week, there are fortunes to be made there. If you’re a real wild man, try South Sudan… they’ve been a country for all of three months. If you want a steady job and work experience, try China or Singapore.

Most of all, just expand your horizons and start to consider possibilities all over the world. Ignore your friends and family, they’ll just try to talk you out of it. And then, in a few years’ time when you’re wildly successful, they’ll pretend like they supported you all along.

Next, Raoul asks, “Simon, what do you think of these stability plans in Europe? It seems like things are starting to calm down a little bit.”

Such is the sorry state of the global financial system… the market rallies when it is decided that Greece will default on ‘only’ 50% of its obligations.

Unfortunately, this doesn’t really fix anything.

Greece is still losing money hand over fist like a drunken playboy at the craps table. Even if the government didn’t have to pay a cent in interest, the budget is still down billions of euros, month in, month out.

As we discussed yesterday, this is nothing new. Greece has been in this position five other times in the past two centuries. This tactic is called ‘selective default’, and it doesn’t work in the long-term because the structural problems still remain. Eventually, they’ll bring out the economic torture devices.

Stefan Homburg, one of Germany’s few contrarian economists, recently summed this up to the German paper Sueddeutsche:

“History shows that [bankrupt governments] take radical measures such as expropriation of private assets, wealth taxes, or banning gold ownership… and in a state of emergency, basic rights are suspended.”

This quote succinctly articulates why international diversification is so important.

Next, Dr. Lynch asks, “Simon, I have Italian grandparents.  Do I have a chance to obtain a passport? If so, do you have a contact recommendation like you had for the fellow seeking a Polish passport?”

Citizenship by ancestry is the best, fastest, and cheapest way to obtain another passport. Italy is one of the countries that allows this, and if you have Italian ancestors, I’d suggest getting started here.

Last, I want to remind all Sovereign Confidential members that our monthly teleconference is on Monday. We’ll have a full presentation of the new FATCA (Foreign Account Tax Compliance Act) rules, and you won’t want to miss it.

If you haven’t signed up yet for SMC, this teleconference is an absolute must. To get access, just sign up for a risk-free trial here.