Why modern democracy is for idiots

Did you know that the word ‘idiot’ is actually derived from the origins of democracy in ancient Greece? Thousands of years ago, a Greek citizen who demonstrated disinterest in politics was labeled ‘idiotes’; it literally meant ‘private person,’ which curiously enough was a term of derision at the time.

Fast forward to the pitiful excuse we have for a democratic process in the world today, and the opposite is now true: you have to be a complete idiot to invest yourself in these politics.

Saturday’s straw poll in Ames, Iowa is a perfect example. A few thousand people voted for their preferred republican presidential candidate, and mainstream media outlets have been talking about it nonstop. There are a lot of things wrong with this system–

First, why should anyone care what a few thousand people in a single town think? Do the whims of 17,000 people really have any bearing on a country of 310 million? In modern democracy, they do.

Michelle Bachmann won the poll. Granted, she won by bribing her voters with a free Randy Travis concert, but such things don’t matter in modern democracy. In the eyes of the media, she is now the front-runner having garnered a whopping 28.6% of the 17,000 people who voted.

The same logic, however, does not apply to the guy who came in second… if you can even find his name anywhere in print. You see, there’s this lowly fellow from Texas by the name of Ron Paul who scored 4,671 votes, just 152 shy of Bachmann.

Yet while the media is heralding Bachmann’s victory as a major success for her campaign, there has hardly been an utterance of Ron Paul’s strong finish on Bachmann’s heels.

The third place finisher, former Minnesota governor Tim Pawlenty, was so dismayed by his results that he withdrew from the race after securing only 13.7% of the votes.

Again, such is the nature of modern democracy… and I feel bad for people who live in the United States that have to put up with another 15-months of this crap.

On one side, President Obama is already flying around the country for his reelection campaign, reading teleprompted remarks that are devoid of any credible plan. Meanwhile, US taxpayers are footing the bill for much of his multimillion-dollar travel and entourage costs.

On the other side, the media is colluding to select front-runners and marginalizing the only guy who actually has a clue of how drastic the US economic situation is.

This system is a complete farce. The ancient Greeks would call you an idiot if you wouldn’t participate in their democracy and focused on your own affairs. Today, you have to be an idiot to set aside your own preparations and put any faith in this system. 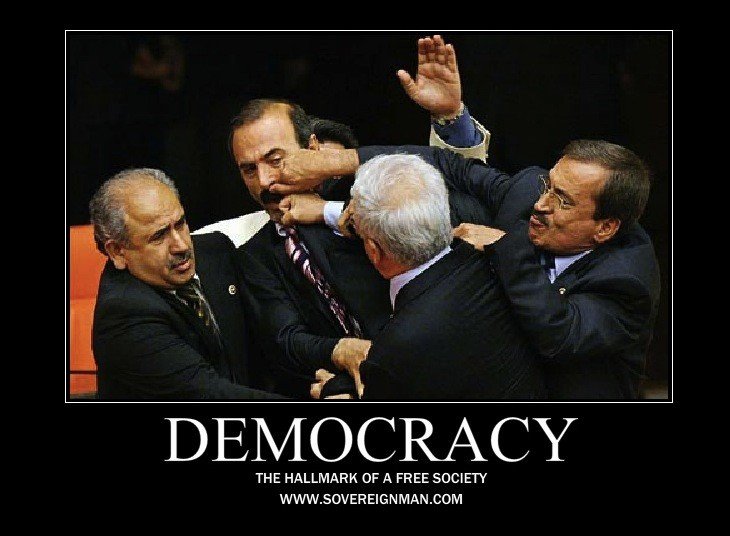 As long as this system is in place, the ‘leaders’ that emerge from it will be cut from the same cloth. They are concerned solely about their own status and have little interest in the voting populace beyond providing whatever minimum benefits are necessary to buy your vote.

In their efforts to consolidate more power and take greater control, they’re hitting the accelerator as they drive the country off the cliff. Putting any stock in this system is dangerous to your family and your livelihood.

I know we’ve all been brainwashed that the government exists to help us, but the truth is that you ultimately have only yourself to rely on. This is not something to fear, but to embrace, and thinking people ought to take steps immediately to increase their self-reliance in this Age of Turmoil.