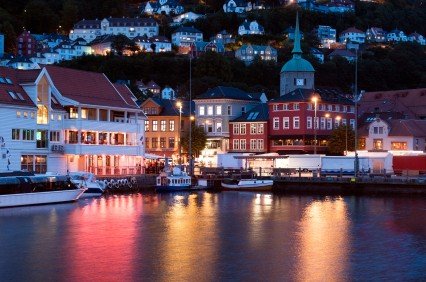 Yes, Norway is certainly one of the wealthiest countries in the world on the basis of GDP per capita… and in a variety of international surveys, it also ranks as one of the ‘happiest’.

And yes, Norway is one of the most heavily taxed countries in the world with a total tax burden of roughly 45% of GDP– almost 4x Hong Kong and nearly twice the US.

VAT here is a whopping 25%. Personal income tax rates border 55%. Corporate profits tax ranges from 28% to as high as 78%. Norway even has a direct WEALTH TAX.

It’s as if Karl Marx himself wrote the country’s tax policy.

Further, when you step back and look at the Norwegian economy, you’ll see that the state drives nearly all of it. The Norwegian government is the controlling shareholder in 8 out of the top 10 employers in the country– companies like Statoil, DNB, Norsk Hydro, etc.

But since everyone seems to agree that Norwegians are so ‘happy’ and have such a high standard of living, is this central economic planning really so bad?

It goes without saying that when you ask people who receive generous benefits from the government whether they’re happy, chances are high they’ll say yes.

But Norwegian happiness goes much deeper into human psyche and how we naturally compare ourselves to others in our peer group.

For example, when a childhood friend goes from rags to riches, people often feel extreme envy and reflect negatively on their own comparative lack of success.

Norway has created a system that makes it virtually impossible to pull ahead of your peers financially. People are excused for not working hard and squandering the opportunities they could have grabbed.

Everyone is the same status, and such equality imbues a unique socialist variety of happiness.

This attitude has been deeply inculcated in Norwegian society through what’s known as Jante Law; this is an informal dictate which essentially says ‘You’re only as good as everyone else.’

Consequently, Norwegian culture limits aspirations of achievement. Workers come to the office, punch a clock, shuffle papers, and go home. There is no cultural drive to work hard and get promoted. Work is viewed as what you have to do for 30% of your life, not an opportunity to achieve more and do something that actually matters.

As an example, the office complex across from my hotel room was a ghost town by 5:06pm yesterday afternoon. And work hours in general here have declined steadily over past decades to just 31 hours per week. 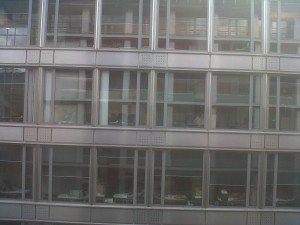 The office across from my hotel room at 5:06pm yesterday. Ghost town.

It shows. How many Norwegian companies can you name? How many revolutionary products and services come out of Norway? Practically none.

So, yes, people are ‘happy’ here. Happy because the system incentivizes underachievement and leisure without the nasty consequence of watching a peer surge ahead financially.

For most people under the bell curve, this is a suitable arrangement. Bureaucrats call this happiness. Maybe so, but it’s at the expense of someone else’s potential.

The other ridiculous assertion is that Norwegians get ‘a lot of value’ for what they pay in taxes.

To be clear, the average Norwegian household pays roughly $70,000 per year in tax. Including the state’s oil income, government tax revenue exceeds $100,000 per household.

Yes, they get free healthcare, free education, and pretty fountains. But for $100,000 per year? The value they get for what they pay is pitiful.

You could pay privately for the most expensive health plans and private schools in the world and still have tens of thousands of dollars in walking around money.

Not to mention, taxes have really driven up the cost of living. It is no coincidence that Norway is simultaneously the most heavily taxed AND most expensive country in the world.

Because of this, Norwegians have limited after-tax discretionary spending cash. Sure they have ‘free’ healthcare, but when dinner for two costs an arm and a leg, people scale back their activities.

This is by design. In keeping people at the same level, Norwegian society has lowered the bar for everyone. There is limited economic freedom to achieve more.

Sure, the system gives them lots of leisure time to enjoy… but this is not necessarily a choice they make freely, rather the only choice they have.

Now, even if this lack of economic freedom seems a reasonable price to pay for national healthcare… even if tamed aspirations and an uninspired career are valid trade-offs for more leisure and less hard work… Norway is not a replicable model.

People who think that ‘we should just be like Norway’ are missing an even greater point: all of this central planning is made possible by huge oil reserves… and for that matter, oil reserves that are DECADES past their peak production.

Norway’s model is not only unreplicable in most other countries, it is also unsustainable.

Mediocrity works great when you can fool society into accepting it and have the oil wealth to finance it. But the true path to prosperity is, and always will be, a system based on economic freedom that rewards hard work, creativity, and achievement.