Why this place is on my shortlist

If you know anything about Thailand, you know about Pattaya. It is, without doubt, one of the wildest places on the planet.  From the mundane to the urbane to the profane to the insane to the inhumane, if you can dream it up, you can do it in Pattaya.

Funny thing, I really like it here… so much that it’s on my short list of places where I would really spend a lot of time.  And no, it’s not for the craziness or the wild parties or the eager young ladies… you can find those in a lot of countries.

Pattaya, and Thailand in general, has an almost zen-like serenity when you get away from the touristy areas.  Just minutes away from the bustling hedonism there are nearly deserted beaches, monks at study, Muay Thai students training, and parents playing with their children in tiny tin shacks, completely devoid of problems or worry.

There is also a plethora of full-time foreign residents in Pattaya who have brought their intellectual and financial capital, and it’s left quite an imprint on the town. Thriving foreign-owned businesses are everywhere– a Danish bakery, German eateries, Russian property agencies, African TV repairmen, Indian IT gurus, US immigration advisors, etc.

They come here for the same reasons as I do. Cost is one factor– even with the Thai baht at a decade+ high against the US dollar, it’s still very cheap. Housing, food, transportation, medical care, and ‘entertainment’ cost next to nothing, though prices are rising… more on this in another letter.

Most of all, though, people end up staying here because Pattaya is simple, peaceful, but still well within civilization.

In Pattaya, you’re an hour and a half from Bangkok Airport which has routes all over the world, and you’re never more than 10-15 minutes from the insanity of Walking Street or the myriad of shops and restaurants… but you can still live like you’re in the middle of nowhere, surrounded by quiet farmland on all sides.

In fact, agriculture is one of other reasons that I enjoy Pattaya so much– it’s quite easy to eat healthy foods here.  For example, just a block from the apartment where I stay is a hydroponic farm which grows a host of organic vegetables and raises free-range livestock with their produce. 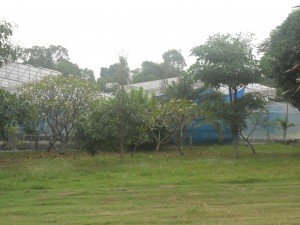 A hydroponics farm in Pattaya

I can literally walk down the street to the farm, see what I’m buying, inspect the conditions, pick out what I want, and walk back home in just a few minutes. It’s quite comforting for me to know exactly the source of the food that I’m putting in my body.

In case you’re not aware, hydroponic farming is based on an ancient technique of using water (instead of soil) to grow terrestrial plants.  Modern horticulture has perfected the method, but it’s still based on the same technology that the Egyptians, Aztecs, and ancient Chinese relied upon to grow many of their own plants.

The major advantage to hydroponics over terrestrial farming is economic scale: you can produce more, faster, and use fewer resources– notably water and land.

To give you an idea, a commercial hydroponics operation based in Arizona grew 600 million kilograms of tomatoes in 2008 on its 318-acre facility; that’s about 95 pounds of tomato per square foot.

Because hydroponics provides a natural barrier to many insects, you can also grow without the use of pesticides– another major advantage in my book.

I really believe in this system, and I intend on implementing a similar farming method as the agricultural cornerstone for the sustainable community concept that we’ve been discussing for the last few months.

In fact, at our upcoming Sovereign Man workshop (February 18-20 in Panama), we’ll have a few sessions and sidebars dedicated exclusively to firming up plans for this sustainable community. If you’re interested in participating, I really hope to see you in Panama at our workshop. Details will be coming soon… these things are a lot of work!