It’s now a “human right” to NOT be offended. Unless you’re the one who’s offended. 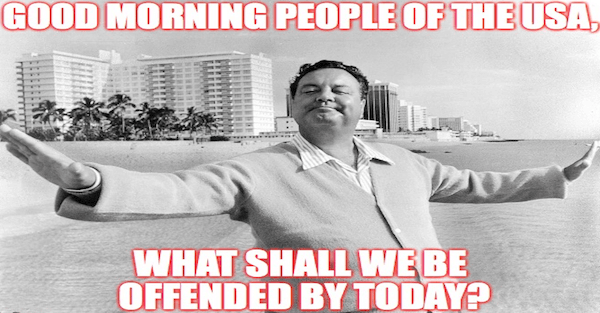 In the latest episode of the completely psychotic breakdown of Western values, Canada’s government has just passed a law that champions sexual identity over science.

It’s called C-16, “An Act to Amend the Canadian Human Rights Act and the Criminal Code”.

Both of these codes prohibit discrimination against individuals based on race, gender, sexual orientation, religion, etc.

And this new law includes gender identity in that list.

Great. Nothing wrong with that. All they’re basically saying with these amendments is that transgendered individuals have the same inalienable rights as everyone else.

It’s sad that they actually have to pass a law to enshrine someone’s human rights… and one day our descendants will wonder why that was even necessary, just as today we are appalled that the institution of slavery ever existed.

But as usual there are some problems with the law. Not just the new law, in fact, but with Canada’s entire Human Rights Act.

I found a number of articles online stating that this new law “criminalizes the incorrect use of gender pronouns,” i.e. if someone born a “he” chooses to be “she”, and you say “Mr.” instead of “Ms.,” you’re going to jail.

To be clear, that’s NOT what this new law says. But the danger lies in the incredible ambiguity of the entire Human Rights code.

Section (14)(1), for example, states that “it is a discriminatory practice . . . to harass an individual on a prohibited ground of discrimination. . .” which includes race, religion, etc. and now sexual identity.

This is where things start to become unglued.

Because if your brain is wired anything like mine, you’re probably thinking, “OK, fine, but what constitutes ‘harassment’ ?”

I’m glad you asked. Because Canada’s Human Rights Commission gives us a rather ominous definition:

“[Harassment] involves any unwanted physical or verbal behaviour that offends or humiliates you.”

So in theory, yes, using incorrect gender pronouns could constitute harassment if it offends somebody, and this is a violation of Canada’s Human Rights and Criminal codes.

I’m unclear when ‘not being offended’ became an inalienable human right.

I’m a prolific student of history, but I’m afraid I must have missed that chapter in the development of Western Civilization.

Look, I’ll always be for anyone’s right to choose the way they want to live, as long as you don’t aggress against other people or their property.

You want to sleep with goats? Go for it. As long as they’re not my goats.

Having said that, I shouldn’t be forced to care.

For me the real clincher in Oh Canada’s new law is its long-winded legislative summary that tramples all over basic science.

Section 1.1.1 tells us, for example, that some people “self-identity with a non-traditional or non-stereotypical concept of gender.”

It’s perfectly fine for people to be whatever they feel. But that doesn’t change the laws of nature: human beings have 23 pairs of chromosomes, one of which determines gender.

What exactly is the stereotype here?

Are magnetism and trigonometry also stereotypes?

Has Western Civilization really reached the point where basic science and human anatomy are set aside to ensure that someone doesn’t get offended?

If you have any doubts about this, check out how Bill Nye the Science Guy explained X&Y chromosomes to children in 1994.

But that was in 1994 when science still mattered.

Today that very segment has been stricken from the episode by Disney’s Buena Vista Television unit, and is available on Netflix only in its edited version.

So if you try watching the show on Netflix, the discussion about gender and chromosomes is no longer there.

Meanwhile, Bill Nye has a new show on Netflix. But instead of actual science, he’s teaching children about “gender spectrum”, “sex junk”, and “butt stuff”.

(Clearly Mr. Nye is on to a revolutionary breakthrough in the scientific method!)

Nye’s gyrating musical guest also gives viewers some sage advice: “Give someone new a handy . . . then give yourself props.”

This is what passes as “science” today; and government / media are rewriting the basic laws of nature to ensure that a handful of people aren’t offended.

(I’m offended at how easily other people are offended. But something tells me my grievance would fall on aurally-challenged ears within Canada’s parliament.)

Have you reached your breaking point yet?