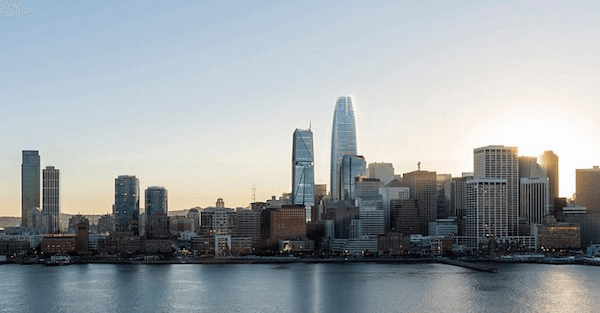 The all-glass tower would rise 57 stories above midtown Manhattan, with a giant spire taking the height to 1,200 ft. It’s currently the fourth-tallest building in New York City, and it cost $1 billion.

The next year, investment bank Goldman Sachs broke ground on its $2.4 billion headquarters in downtown NYC.

The investment bank brought an entire village to its Battery Park City digs – including several restaurants from famed restaurateur Danny Meyer, a wine store, a florist, a bakery and a barber shop.

Goldman also bought a nearby hotel (which included a movie theater) and a parking garage.

But before either bank moved into their new headquarters, the Great Financial Crisis of 2008 hit. Bank of America and Goldman’s share prices fell by 93% and 79%.

In 1999, a real estate analyst named Andrew Lawrence introduced the “Skyscraper Indicator.” He notes the world’s biggest buildings are typically erected on the eve of a crisis.

It all started with a building called 40 Wall Street.

At the same time, another new building, The Chrysler Building, was planning a secret spire so it could claim the title of the world’s tallest tower.

But planners for the Empire State Building had them both beat.

Certainly there’s a part of the Skyscraper Indicator which shows ‘peak hubris.’ Big companies have to show off how rich and successful they are.

But more importantly, huge skyscrapers are also an indication that it’s way too easy to borrow huge sums of money.

And that ‘easy money’ is also an indicator of the top.

When the company announced it would put its name on the building, it had never turned an annual profit.

Coincidentally, Salesforce also put its name on an NYC tower located at 3 Bryant Park – next door to Bank of America.

But it’s not just Salesforce that’s on a spending spree.

Amazon has a $4 billion campus in Seattle. In front of the tower, you’ll find three giant, glass spheres. The tallest is 90 feet high and 130 feet in diameter.

The spheres will have trees, waterfalls, rivers and even treehouse spaces. The company hired a world-class horticulturist to populate the 70,000-square foot space with tropical plants from around the world.

Amazon won’t say how much it spent on the spheres. But King County, where Amazon HQ is located, estimates total improvements to the block (including the tower) at $284 million.

“The tech industry is trying now to express itself through buildings,” said Gundula Proksch, a professor of architecture at the University of Washington.

Businesses don’t exist to “express themselves” through architecture. They exist to maximize returns for shareholders.

And Silicon Valley is famously inept in producing profits… like our old friend Netflix, which lost $2 billion last quarter.

Or Snapchat. Uber. Tesla. Box. Twitter. Zynga. Groupon. Lyft. LinkedIn (which was acquired by Microsoft last year). Workday. Pinterest. Square.
This list goes on and on.

Uber is most noteworthy.

The company, having lost billions upon billions of dollars of its shareholders’ money, is spending another $250 million on its new headquarters in the
San Francisco area.

And Apple (which actually IS profitable) just held its first public event at its new $5 billion ‘spaceship campus’ yesterday.

All of this comes at a time when stock markets both in the United States and around the world are at record highs.

And, according to a recent investor survey from Wells Fargo and Gallup, confidence and optimism among US investors is at its highest level in 17 years.

17 years ago, of course, was 2000… the year that the great dot-com stock market bubble burst (after which the NASDAQ index fell 78%).

At the same time, we can see very expensive valuations–

One important example is the S&P 500’s Price/Sales ratio.

This ratio tells investors how expensive a company’s stock price is relative to the amount of revenue that it generates.

Ideally you’d want to buy shares in a company whose value (stock price) is a very low multiple to its revenue.

Yet according to data going back more than 50 years, the Price/Sales ratio across the entire US market is at its most expensive level ever.

Personally I am a very risk averse person– I don’t like losing money.

I’m only willing to take significant risks when the potential for return can be 50:1 or more (like speculating in select, early-stage businesses).

Those odds just don’t stack up.

No one has a crystal ball. And this market can continue being irrational for months or years to come.

(Though throughout history, this Skyscraper Indicator has been pretty accurate…) 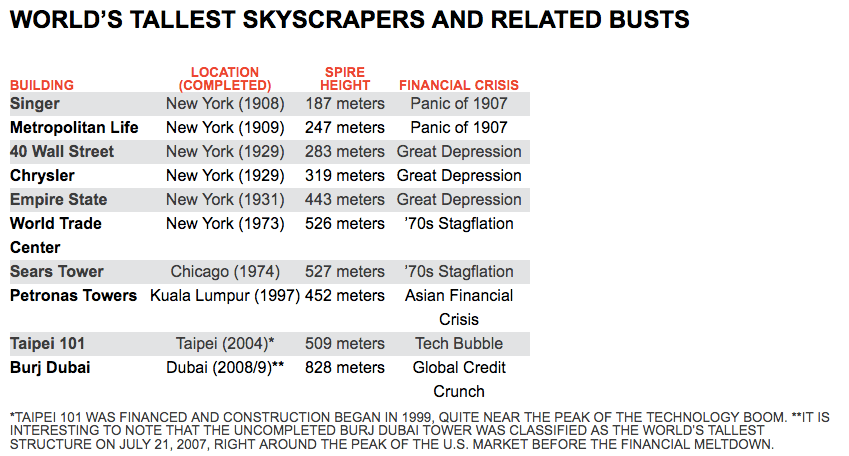 The only thing we know for certain is that markets are cyclical. Right now we’re in a boom.

As always, it will be followed by a bust. We just don’t know when.

But in the meantime I’d rather earn 10% to 15% on more conservative, alternative investments where the risk of loss is almost zero… waiting patiently for the right buying opportunity to come along.