This bubble finally burst. Which one’s next? 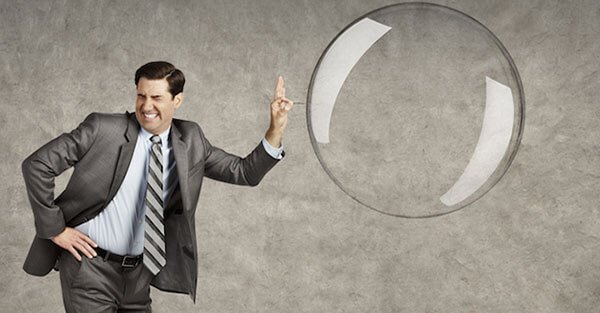 Like so many other high-flying Silicon Valley startups, Clinkle was supposed to ‘make the world a better place’.

Founded in 2011 by a guy barely out of his teens, the company picked up early buzz after proclaiming they would disrupt mobile payments. Or something.

Silicon Valley venture capital firms were apparently so impressed with the idea that they showered the company with an unprecedented level of cash.

(Given that investing in an early stage company is high-risk, investors might provide a few hundred thousand dollars in funding, at most. Clinkle raised $25 million.)

The company went on to burn through just about every penny of its investors’ capital.

There were even photos that surfaced of the 21-year old CEO literally setting bricks of cash on fire.

At the end of the farce, Clinkle never actually managed to build its supposedly ‘world-changing’ product, and the website is now all but defunct.

This is rapidly becoming a familiar story in Silicon Valley.

For the last 6-7 years, Silicon Valley startups have been able to raise unbelievable amounts of cash.

Yet so many of those companies haven’t managed to turn a profit. Ever.

There’s some of the big names like Uber and AirBnb which are supposedly worth tens of billions of dollars despite having racked up enormous losses.

(Last year ride-sharing company Lyft promised investors that it would cap its losses at ‘only’ $600 million per year. . .)

But there are countless other examples of startups being anointed with absurd valuations and continually replenished with fresh capital even though they keep losing money… and have no plan to ever make money.

It’s as if the more money these startups lost, the more popular they became with investors.

Clearly that was unsustainable.

In business, profit (or even more specifically, “levered free cash flow”) is the most important metric.

No company is born profitable; it takes time for entrepreneurs to create and build a financially sustainable business.

In the meantime, startups sometimes need outside investment capital to keep going.

Early stage investors take a risk that the company’s founders and management will be able to execute on a plan that turns a big idea into profit.

Silicon Valley investment firms ignored this basic principle for years, dumping their investors’ savings down the toilet into loser companies with no hope of profitability.

It was a bubble, plain and simple… and now that bubble seems to have burst.

According to Dow Jones Venture Source, venture capital firms in Silicon Valley pared down their investments in tech startups by 30% in the last several months after reaching peak insanity in late 2015.

Unprofitable, unsustainable companies that used to easily be able to raise capital during the bubble years are now struggling to find new investors.

Many are starting to go out of business. For others that manage to successfully raise more capital, the terms are much more strict and conservative.

It’s a new reality, and one that makes more sense: lower valuations, a push for profitability, less insanity.

It makes me wonder, though– if the startup bubble in Silicon Valley can burst, why shouldn’t the bubble in the larger stock market?

In some respects there’s very little difference between the two.

The average stock is trading at a record high valuation despite tepid performance.

And some of the most popular companies are as financially unsustainable as Clinkle was.

The company’s most recent earnings report for the period ending March 31, 2017 shows, yet again, negative Free Cash Flow of MINUS $422 million.

Remember, “Free Cash Flow” is a MUCH better indication of a company’s financial health than profit because it takes into consideration all the capital they must reinvest back into the business.

In the case of Netflix, management must constantly make new ‘capital investments,’ i.e. acquire more content to deliver to their viewers.

If they don’t keep updating their content library, Netflix will go out of business.

So the company has been steadily accumulating huge losses and burning through cash.

They make up the shortfall by going deeper into debt, which is clearly unsustainable.

Don’t get me wrong– as a consumer, I love Netflix.

But it seems nuts that a company with such an unsustainable financial model could be so popular with investors and worth an all-time high $66 billion.

Something is wrong with this picture.

And these investment fundamentals just don’t seem that different than the insanity from the Silicon Valley startup scene over the last few years.

The Silicon Valley bubble has already burst. Given so many similarities, it seems foolish to bet that the stock market bubble will stay inflated forever.