After printing trillions Bernanke realizes “a trillion there, a trillion here” won’t fix the economy 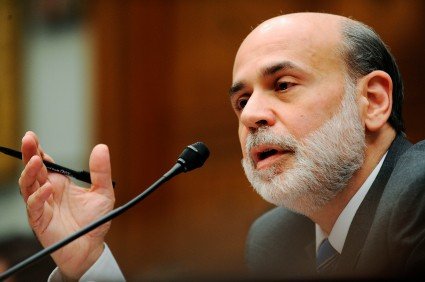 On Thursday, Fed Chairman Ben Bernanke addressed congress and their concerns over low interest rates and the stagnant economy. Throughout Bernanke’s entire conversation, one of the few accurate statements he made was, “a trillion there, a trillion here” won’t solve the growing deficit, which was quite contrary to his past behavior of printing trillions in order to fix the economy. Forbes further narrates the scene:

“The Chairman rejected the notion that artificially low rates, set by the Fed, gave the U.S. a false sense security, allowing Congress to procrastinate.  Bernanke also joked that ‘a trillion there, a trillion here” from the Fed wouldn’t solve the budget deficit, but that it was Congress’ job to figure it out.

‘Monetary policy is no panacea’ said Bernanke, repeating himself to Congress once again.  The Fed Chairman had previously explained that quantitative easing remained on the table, but gave no hints as to what the Fed’s coming actions would be.”

“The political lines were clearly drawn at the Joint Economic Committee’s hearing on Thursday.  Republicans had Bernanke in their sights, blaming him for doing too much and even considering a third round of QE.  The Fed Chairman rejected those accusations, despite acknowledging that he ‘recognize[d] that rates are quite low,’ before adding ‘we do have the tools that will allows to provide further accommodation.’  In other words, don’t worry about how low rates are, we can push them down even further if the economy doesn’t pick up.

A defiant Bernanke told the panel that ‘the reason to keep rates low isn’t to accommodate Congressional fiscal policy,’ rather it was meant to stimulate the economy, via wealth effects for consumers, lowering spreads, and cheapening mortgages, among other things.  At one point, he questioned the assertion that low rates had helped the deficit build up, noting that the budget deficit was so large that irrespective of the level of rates (this is when he made his “a trillion there, a trillion here” statement), Congress had the incentive to fix the problem before it got worse.

The Chairman was also asked about too big to fail.  Major financial institutions like JPMorgan Chase, Citigroup, Bank of America, and Wells Fargo hold about $9 trillion in assets, or two-thirds of GDP, according to Senator Bernie Sanders, posing major risks to the financial sector.  Bernanke agreed that he would like to end TBTF in Wall Street by eliminating the advantages of being so large, but also acknowledged difficulties in deterring what the right size of a bank should be.”