The NYPD is better at abusing your rights than protecting them 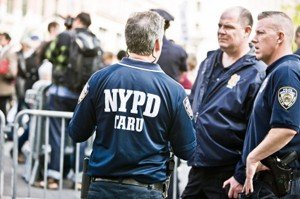 The recent Occupy Wall Street movement may have some misdirections, but like all groups in the US, they have the constitutional right to protest. While it may be written into law, police officers have repeatedly ignored these rights in favor of abusing disgruntled citizens, especially in New York City. Reason expands on a recent report detailing the excessive use of force by the NYPD and their blatant abuse of power:

The exhaustive report (which I was also interviewed for, having covered the protests for Reason and other outlets) is titled, “Suppressing Protest.” It details a full 130 cases of excessive force which the authors say “warrant investigation by authorities.” Additionally, the report alleges that since September 2011, city officials have brought about “massive and continuous overpolicing and poor communication, obstruction of press freedoms and independent legal monitoring, constant police surveillance, unjustified restrictions on the ability of individuals to peacefully assemble in public spaces, arbitrary rule enforcement, and transparency failures.” The report also confirms that “there has also been near-complete impunity for alleged abuses.”

A broad spectrum of physical attacks by officers is cited, ranging from “hard kicks to the face, overhead baton swings, [and] intentionally applying very hard force to the broken clavicle of a handcuffed and compliant individual,” to comparatively minor harassment, like petty shoving. Less severe altercations are still documented, the authors reason, “because of the predictable chilling effect that unnecessary police force has on the enjoyment of assembly and expression rights.”

While the recorded acts of police violence numbered over a hundred, the NYPD’s obstruction of protesters’ First Amendment rights wasn’t always violent. The police ordered arbitrary sidewalk closures, aggressively enforced laws governing vehicular traffic flow, made indiscriminate arrests of journalists and legal observers, and were generally obstinate. Additionally, police officers who broke the law were let off with warnings, or less.