Federal Reserve balance sheet explodes to within 0.5% of all-time high in just one week 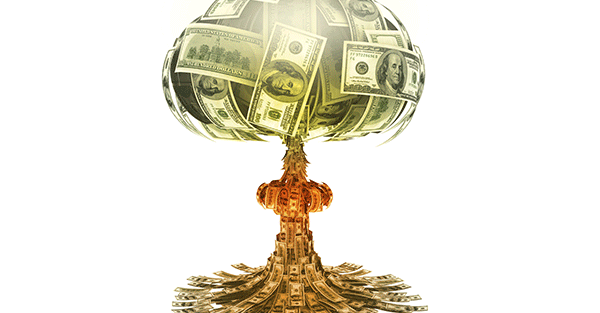 Remember all that talk about “taper” last year?

After years of conjuring trillions of dollars out of thin air and rapidly expanding its balance sheet, the Federal Reserve promised to end its unprecedented ‘Quantitative Easing’ (QE) programs.

A huge balance sheet means that the Fed is overleveraged. It means that they have only a tiny margin of safety in reserve in case there are serious problems in the financial system.

Back in 2008, major banks (like Lehman Brothers, Wachovia, etc.) also had massive balance sheets that were overleveraged, and almost no margin of safety.

When things started to go bad, they all went bust.

So as the Fed spent six years printing money and expanding its balance sheet, they were taking on a substantial amount of risk.

Both Janet Yellen and her predecessor Ben Bernanke promised the world that the Fed would ‘taper’, meaning they would reduce and ultimately eliminate the QE bond-buying programs.

By October, QE officially ended. And the dollar started to strengthen as a result.

But it turns out this was a load of crap.

Every Thursday the Fed publishes its balance sheet for anyone who cares to pay attention, and I track this religiously.

(Most of the increase came from buying mortgage-backed securities– you remember, the ‘toxic’ asset class that blew up in 2008…)

With this huge addition, the Fed’s balance sheet is once again back over $4.5 trillion… within 0.5% of its all-time high.

This is the exact opposite of ‘tapered’. It’s bloated. And dangerous.

The Fed has almost no margin of safety. And if you marked to market the value of the Fed’s assets, they would most likely be insolvent.

Think about the big picture here–

Yesterday I told you how the FDIC, in its own words, doesn’t think they’re prepared for the next financial crisis. And that major US banks often have razor-thin levels of liquidity.

Now we see the Federal Reserve, once again, has no margin of safety and is effectively insolvent.

And all of this is backed up by the US government that, based on its own financial statements, has a negative equity of MINUS $18 trillion.

This is hardly inspiring.

Most people been brought up to believe that banks are safe. The financial system is safe. The US dollar is safe.

But the objective data here is overwhelming: this system is not safe.

Nobody has a crystal ball… least of all me. It’s possible that things could continue like this for years. Or it could all come crashing down tomorrow. No one knows.

But in the face of so much risk, it certainly makes sense to reduce your exposure.

Hold some assets outside of this system. Own some real assets, whether gold held abroad, overseas property, or a productive business.

Consider moving a portion of your savings to a strong bank in a solvent country abroad.

Don’t hold all of your eggs in one basket, especially when that basket is a nation with an insolvent government, insolvent central bank, and overleveraged financial system.