How to give the NSA the finger 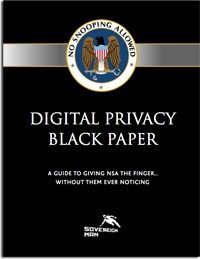 On March 10, 1975, a group of US diplomatic and national security officials gathered at the office of the Turkish foreign minister’s office in Ankara. Henry Kissinger was among them.

The discussion turned to foreign aid and supply of parts for military equipment, at which point Kissinger (Secretary of State at the time) suggested something that violated the law.

William Macomber, the US Ambassador to Turkey, said, “That is illegal.”

Kissinger didn’t miss a beat, replying, “Before the Freedom of Information Act, I used to say at meetings, ‘The illegal we do immediately; the unconstitutional takes a little longer.”

Then, in an almost cartoon-like reaction, the room filled with laughter. You can practically see the rising cigar smoke and fatcats slapping each other on the back as they stick it to the little guy.

But that one quote, probably more than anything else, sums up the US government’s attitude: they will do whatever they want, legal or not, Constitutional or not. Most government in the western world follow the same principle.

Just in the last few months, the US government has been found using its tax authorities to bully political opposition groups. They’ve confiscated phone records of the so-called ‘free press’. And they’ve been caught, very publicly, spying on… everyone.

It’s a sad state of affairs when NSA Whistleblower Edward Snowden has been forced to flee to the governments of China, Russia, Venezuela, and Ecuador in order to avoid rotting away in a US prison, simply for publicizing the government’s very unconstitutional crimes.

Now they’ve revoked his passport– something typically reserved exclusively for international pedophiles according to Chapter 4, Title 22 of the US Code.

It’s as if the government is happy to continue bending or breaking the law in order to destroy someone who blew the whistle on them breaking the law. Very strange indeed.

Back in the Land of the Free, attention seems to have shifted. The discussion in Congress is not “let’s shut down these programs,” but rather, “how do we crucify Snowden?”

Make no mistake, these spying programs have been around for a long time. And they’re here to stay. Which means we all have a choice to make.

Either we can (a) simply accept that the government is spying on us, or (b) we can take some very simple steps to take back some of our privacy. And freedom.

The good news is that it’s fairly simple to do this in the digital world. There are a number of tools, many of them free and open source, to help you safeguard your privacy.

Over the last two weeks, my team and I have put together a special report about digital privacy and security; it covers everything from email to text messaging to VOIP. And we’re giving it away absolutely free, no strings attached.

There’s a lot of really important information in here, and many of these steps are very, very simple to implement. You don’t need to be a techie. You just need to care about your own freedom.