044: Google Wallet: the babystep into Bitcoin 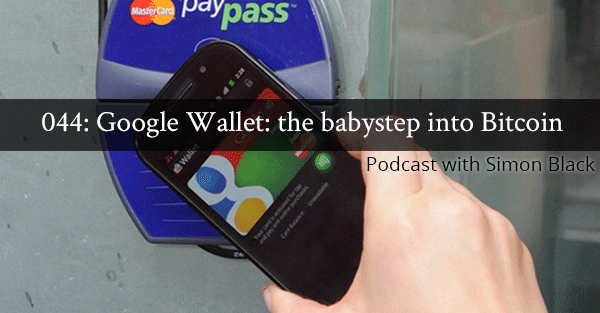 When I first came to Burma (Myanmar) several years ago, there was scarcely an ATM to be found anywhere.

It was primitive. And frustrating.

After all, most people coming from the West tend to think their banking system is robust and highly advanced.

And that’s true to a degree. Internet banking and ATMs are certainly nice modern conveniences.

But if we go back in time and look at traditional banking as far back as the Middle Ages, there’s actually very little about the industry that has changed.

It’s all still quite primitive.

Centuries ago, banks would receive deposits from their customers. And in exchange, they would issue a receipt, or ‘bank note’. Pretty simple.

Whoever had possession of the bank note was entitled to withdraw that money from the bank. So naturally those notes eventually became a form of currency.

If you owed a debt to someone, and presuming s/he had confidence in the bank, you could settle your debt with the bank note instead of actual money.

And out of this system grew a vast, complex network of interbank credit.

In a typical deal between two banks, for example, there would often be no actual money changing hands.

Instead, they would merely make an entry in their books indicating that one bank owed money to the other.

So instead of passing around cash or gold, banks would settle deals with accounting entries and promises to pay.

Today the practice is almost identical, it just happens electronically instead of on paper.

Central bank balances are credited in favor of one bank or another, but there’s still no money that changes hands.

Again, ATMs and Internet Banking are modern conveniences. But they have done nothing to truly disrupt the centuries-old banking model.

That is now changing. Quickly.

Tech companies are starting to figure out how to make every traditional banking function faster, cheaper, and better, all while eliminating the middle man.

Companies like Revolut, Transferwise, and Dwolla, for example, are online money transfer services that can send funds cheaper and faster than banks.

KlickEx is a currency service that provides a peer-to-peer market for foreign exchange, eliminating the need to use a bank.

Countless crowdfunding platforms exist to obtain startup capital for a new businesses. So no one needs to go to the bank with hat in hand anymore.

And there’s a multitude of peer-to-peer lending platforms where you can borrow money for just about anything– from a home mortgage to a new car, all without a bank.

Companies like Square and Stripe are rapidly taking over credit card processing, yet another industry that used to be dominated by banks.

And even the most basic practice of taking deposits is now on tech companies’ radars.

Google revamped ‘Wallet’ service, for example, allows consumers to effectively park their savings with Google instead of a bank.

So rather than holding your cash at some illiquid, poorly capitalized bank, consumers can choose one of the most profitable companies in the history of the world to be their direct financial counterparty.

Now, I’m not suggesting you rush out and do this; I’m merely pointing out that this is a rather large nail in the coffin of the financial industry.

Deposits. Lending. Funds transfers. Credit Card Processing. Foreign Exchange… can all be done now better, faster, and cheaper outside of the banking system.

This isn’t some wild conspiracy theory. This is a fact; all of these tools ALREADY exist. It’s just a question of how quickly they’ll be adopted.

And if you look at the last great trends in consumer technology (the Internet, smart phones, etc.) the time frame was ten years or less to achieve global scale.

Banks’ days are numbered. And in a decade’s time, we won’t even recognize the financial system.

We’ll be doing everything online, global, and without the constant nuisance and central control of governments and banks.

Join me for today’s Podcast as I dive much more deeply into this topic, including the obvious implications for your money, and the future of cryptocurrency.