054: Celebrating 14 years since we kissed our freedoms goodbye 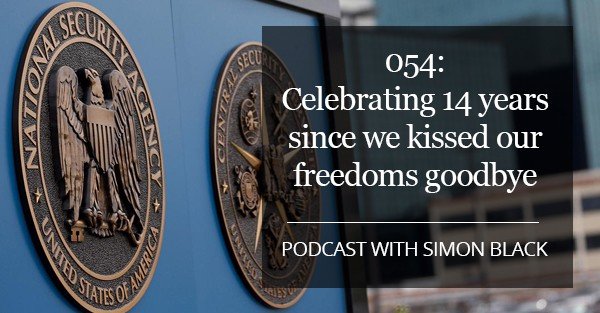 If you haven’t already, now’s the time to get out your party hats to celebrate the 14th anniversary of the USA PATRIOT Act.

You know about the law, I’m sure; passed barely six weeks after the 9/11 attacks, the USA PATRIOT Act is one of the most sweeping, liberty-destroying pieces of legislation in American history.

Remember the rule of thumb: the more high-sounding the name of a law, the more disastrous its effects. And the USA PATRIOT Act absolutely conformed.

It stands for Uniting and Strengthening America by Providing Appropriate Tools Required to Interdict and Obstruct Terrorism.

And this name is truly disingenuous when you think about it.

Seriously, how was America to become more ‘united’ by allowing warrantless searches, vastly expanding the powers of secret courts, and completely doing away with entire sections of the Constitution?? That’s just absurd.

The name itself is a cruel joke on liberty.

At 132 pages, the USA PATRIOT Act was a pretty beefy piece of legislation. But what most people fail to realize is that the law is entirely incomprehensible.

Instead of simply stating in black & white what the new dark powers of government would be, the USA PATRIOT Act makes obscure modifications to other laws.

Here’s an example of what I’m talking about, pulled from page 20 of the text of the legislation:

Section 3123(d)(2) of title 18, United States Code, is amended (A) by inserting “or other facility” after “the line”; and (B) by striking “, or who has been ordered by the court” and inserting “or applied, or who is obligated by the order”

Is that supposed to mean anything to anyone? The language is completely mystifying.

Well, as it turns out, this precise section is part of what authorizes the government to monitor your phone and Internet communications.

This is, of course, one of the primary criticisms of the law: it was rushed through Congress before anyone had a chance to read or understand it, at a time when everyone was scared and willing to give the government any power it wanted.

The end result was a de facto Police State in the Land of the Free.

Earlier this year, several key provisions of the USA PATRIOT Act were set to expire. It was an opportunity to take back some of the freedom that had been lost.

Yet Mr. Hope and Change himself, Barack Obama, signed multiple bills into law to extend, and even expand, the USA PATRIOT Act’s powers.

It’s amazing when you think about it: a nation that was founded on the principles of personal liberty, which fought the Nazis and built the most powerful economy in the world, is so fragile and afraid of men in caves that it cannot imagine its existence without Orwellian surveillance programs.

So he and Barack Obama conveniently solved that problem by eliminating America’s freedoms.

This is life now in America 2.0; it’s not the America we once knew, and it’s time to adjust accordingly.

I invite you to listen in to today’s podcast as we discuss some of the most striking differences between now and America’s golden days.

You won’t believe what once used to be possible in the Land of the Free.