059: Don’t count on banks and governments to go gentle into that good night… 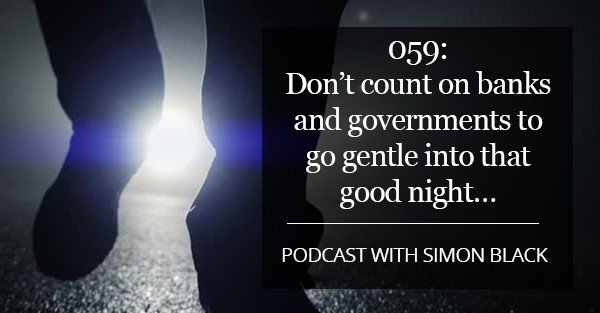 Pop quiz: What was the top grossing movie in the world the last time the US tax code was overhauled?

(Other major hits that year include Karate Kid II, Crocodile Dundee, and Ferris Bueller’s Day Off)

Think about it– this a tax code that was created for a highly industrialized economy. And that might have made sense thirty years ago.

But in the decades since, everything has changed. The world is flat. Globalized. And completely digital. An antiquated tax code based on geography and industrial manufacturing simply doesn’t make any sense today.

Our banking system is in a similar position. Banks today continue to insert themselves in the middle of every financial transaction imaginable, just as they did centuries ago.

Savings, lending, transfers, payments, foreign exchange—all of these transactions are highly centralized (and manipulated) by a private cartel that has no business existing in our modern world.

Today there are so many platforms available where we can send and receive peer-to-peer payments on our mobile phones.

We can hold deposits in the Blockchain. We can raise capital to start a new business on any number of crowdfunding platforms.

Banks are no longer necessary for any financial transaction. And yet they still bully their way into dominating the financial system.

This banking system might have been appropriate centuries ago when Medieval merchants needed a centralized way to extend credit. But it just doesn’t make sense today.

Similarly, global trade continues to be underpinned by a reserve currency issued by the greatest debtor that has ever existed in the history of the world.

This might have been appropriate in 1944 when they created a dollar-based financial system after World War II. But it no longer makes any sense today.

Banking, trade, and even our systems of government and the way we organize ourselves as a society, are all based on anachronistic traditions that don’t belong in the 21st century.

These systems are changing. And it’s already happening. All the alternatives and resources already exist.

This time is not different, and it’s foolish to think the nation state will last forever.

Dominant reserve currencies have changed over time, from the Byzantine gold solidus, to the Venetian ducat, all the way to the US dollar today. We cannot expect the dollar to maintain its position forever.

We can see these changes happening already.

Wealth and power are shifting. Central bankers are running out of ammunition. Almost every major western government and central bank is on the brink of insolvency if not already bankrupt.

Developing nations are already creating their own alternatives to the US-dominated financial system. Modern technology is turning the commercial banking system into an endangered species.

And people are finally starting to get sick and tired of their system of government, advocating for the most extreme outsiders they can find.

Isaac Newton told us that an object in motion tends to stay in motion. And these changes are very much in motion.

40 centuries of human history demonstrate that political and banking elite will not simply roll over for financial system 2.0 to take over. They will not go gentle into that good night.

And that’s why these great changes bring both great risk, as well as great reward. Or more appropriately, the potential for both great loss and great opportunity.

Join me in today’s podcast as we discuss these risks and rewards, as well as so many more examples of outdated institutions that you might not have ever noticed before.