041: Where does incompetence end and criminality begin? 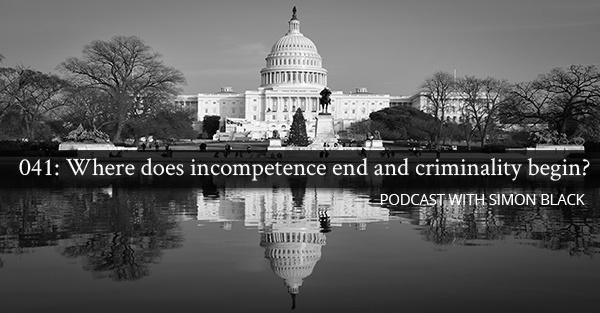 Podcast Episode #41
Where does incompetence end and criminality begin?

Historian Will Durant once wrote “in the last 3421 years of recorded history only 268 have seen no war.”

This is astounding. Warfare is constantly with us, often for the most absurd reasons.

These days we’re told that the War on Terror makes us more free.

We’re programed on days like Memorial Day to sing songs about our freedom and to thank the people in uniform for making us more free.

The question I would respectfully submit is, do you feel more free today than you did 5, 10, 20 years ago?

We now live in an era of unprecedented government intrusion.

Senior citizens are thrown in jail for failing to file disclosure forms.

Spy agencies arrogantly engage in illegal surveillance on their own citizens.

And excessive force is so commonplace it barely registers as newsworthy any more.

Curiously a number of polls from 2013 and 2014, including Gallup and the Washington Post, actually show that more people are afraid of the government than of terrorism itself.

This isn’t freedom. And it’s a complete myth that soldiers fight and die in the name of freedom anymore.

Warfare today means that a few people at the top of the military industrial complex, banking, and oil services companies become extremely rich. And everyone else pays the price.

The price for everyday citizens is having less freedom than before.

The price for future generations is inheriting a tremendous war debt.

And the price for soldiers themselves is coming home wounded, limbless, or not at all.

In today’s podcast, I introduce you to Joe, one of those recent veterans who lost his right leg.

I recently met him while in the US, and he has an unbelievable story.

Despite losing a limb in combat, Joe can’t get a new leg because the FDA won’t approve the procedure that he needs.

It’s called osseointegration. And the FDA thinks that it might be too risky for Joe.

Risky. Kind of like being in a combat zone in a country that never should have been invaded to begin with for reasons that were all lies, all to support a war that only makes the country less free.

So since the government doesn’t think that Joe is responsible enough to make his own decisions, he now has to go overseas and pay tens of thousands of dollars out of his own pocket.

Joe doesn’t have the money; so a family member set up a donation page on the Internet trying to get help. (I’m not publishing the link here because I’m going to take care of it myself.)

It’s amazing when you think about it– a combat veteran who lost a leg supposedly fighting for ‘freedom’ can’t have the medical procedure he needs because a destructive government bureaucracy.

That’s what freedom means today in America. And nobody’s fighting for it.

Soldiers are off risking life and limb for oil companies, banks, and defense contractors. And citizens are distracted with bread and circuses.

All the while, government power continues to expand at the expense of the individual.

And to think through the options for winning it back once again.

You can listen in on today’s Podcast, and learn more about Joe’s unbelievable story, here:

Podcast Episode #41
Where does incompetence end and criminality begin?