057: Here’s how to hedge the massive risks in the banking system 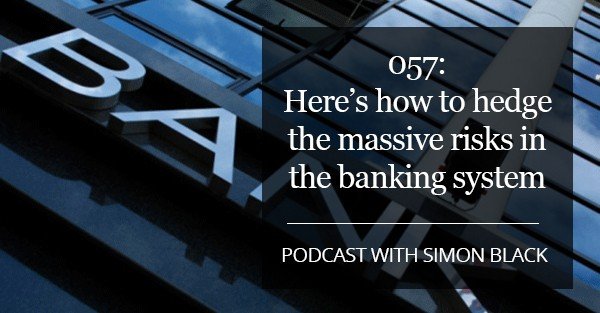 World War I was over. The Treaty of Versailles had been signed two years before.

And Germany, the biggest loser from the war, had been stuck with both the blame and the bill.

Germany’s war debt– which it owed not only for its own war-related expenses, but also for reparations to the victors– was devastating.

They didn’t have the money, so they started printing it.

Not surprisingly, the German mark began to sink. It started slowly at first, but by 1921 hyperinflation had taken hold until prices soared by thousands of percent.

One of my favorite stories from this period, was of the elderly man who went to the police to report a robbery. Thieves had stolen a wheelbarrow of money.

It was common at the time to use wheelbarrows to transport the huge sums of cash that were required to buy even the most simple things like bread and milk.

Undoubtedly the entire society was upturned by this hyperinflation. But as history shows, in any situation, there are always winners and losers.

Pensioners and people who responsibly saved their money were wiped out; whereas people who had borrowed to invest in real assets did extremely well.

For people who saw the decline of the mark coming and bet against it, generational fortunes were made in a matter of years.

In the case of Germany in the 1920s, few people probably expected that hyperinflation would ensue.

Even the president of their central bank, Dr. Rudolf Havenstein, firmly believed that there was zero connection between price levels and the amount of money he printed.

Yet it happened, and those who saw the warning signs and took steps to reduce their risk did very well.

Today there is no shortage of risk in the financial system either.

Negative interest rates are becoming more and more common in developed nations and they’re on their way to America as well.

Every time there’s a recession, the government cuts interest rates by easily half a percent to a percent.

Meanwhile, Western banking systems are highly illiquid, meaning that they have very low cash equivalents as a percentage of customer deposits.

This isn’t some wild conspiracy theory. You can see it for yourself in the financial statements banks publish every quarter.

Solvency in many Western banking systems is also highly questionable, with many loaded up on the debts of their bankrupt governments.

We live in a world where questionably solvent, highly illiquid banks are backed by under capitalized insurance funds like the FDIC, which in turn are backed by insolvent governments and borderline insolvent central banks.

This is hardly a risk-free proposition.

Yet your reward for taking the risk of holding your money in a precarious banking system is a rate of return that is substantially lower than the official rate of inflation.

And in many cases, it’s even negative. Rates are already negative in Europe, and again, it’s coming to the US. Either way, you’re guaranteed to lose money.

Risk is a funny thing. The reason why it’s so frequently misdiagnosed is because there’s often a huge discrepancy between the actual risk and the perceived risk.

You can see that very clearly with banking.

People perceive the risk in their banking system to be zero.

And while I’m not suggesting that there is some imminent collapse, the data clearly indicate that the actual risk is significant.

Given the meager and even negative interest rates, the risk-reward ratio just doesn’t add up.

To address different types of risk in the system, I see four main solutions:

One is to hold physical cash, enabling you to effectively be your own private banker and giving you an excellent short-term hedge against risks in your domestic banking system.

However, this comes with additional physical security risks and potential political risks such as civil asset forfeiture or cash bans.

Another option is to establish a foreign bank account in a jurisdiction where banks are liquid, well-capitalized, and backed by a government with minimal debt.

It’s hard to imagine you’d be worse off for having a portion of your savings in a safe, stable, debt-free jurisdiction.

Then there’s gold and silver, which are excellent long-term hedges, not only against risks in the banking system, but the monetary system at large.

Last but not least, it is 2015, and I would be negligent if I didn’t mention cryptocurrency as a viable option to hedge risk in both the banking and financial system.

Today’s podcast goes into comprehensive detail about these risks and their solutions. I invite you to listen in here.