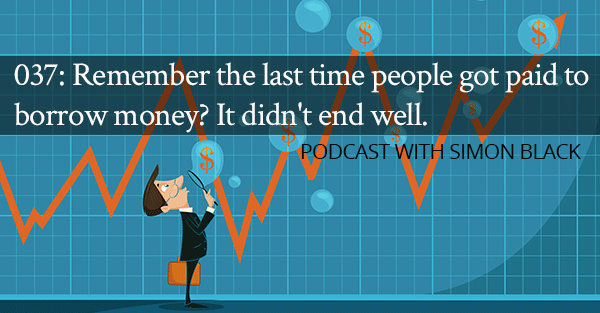 He then transitioned to interview an entrepreneur who is raising money to colonize Mars.

Now, as much as I’m sure we’re all fans of wombats… and as much as it might be a great idea to colonize Mars, it’s time to be soberingly honest: these are classic indicators that we’ve reached the top of the market.

Money is no longer serious business. It’s all fun and games chasing the latest investment fad with no regard whatsoever to the risks involved.

In fact, the very idea of ‘risk vs. reward’ is completely broken. Now it’s all risk, very little reward.

As my partner in Asia Tim Staermose told me yesterday, “Sensibly investing long-term savings and pension money for acceptable risk-adjusted returns could not be further from everybody’s minds.”

Of course, this is what happens when interest rates are effectively zero… or even negative as they are in certain cases in Europe.

We’ve talked about this before— Europe has such dangerous financial incentives now that in certain cases there are SAVERS who are paying the bank to deposit their money, and BORROWERS who are being paid by the bank to go into debt.

But to say this is unprecedented is actually incorrect.

In fact, it was only a few years ago that borrowers in the United States had HUGE incentives to go into debt.

After 9/11, the US Federal Reserve pushed interest rates down to nearly zero. Mortgage rates dropped, and suddenly it became incredibly cheap to buy a home.

Demand picked up… gradually, then suddenly.

Demand for housing (and hence mortgages) became so great, in fact, that banks began to doggedly compete with one another.

The conservative practices of the past were abandoned. Instead of demanding a 20% down payment from the borrower and financing 80% of the purchase price, some banks started offering 90% loans. Then 95%. Then 100%.

At the height of the bubble, we were seeing people with no job, no income, and no assets to post as collateral receiving 103% loans. In other words, people were essentially being paid to borrow money.

Markets tend to have very short memories. But I think we can all recall that this experiment in no-money-down, teaser-rate lending did not end well at all.

Curiously, what we’re seeing now is even worse.

Now interest rates literally are negative. Most notably, you have to pay money for the privilege of loaning your savings to bankrupt governments.

It’s easy to look back on the housing crisis with 20/20 hindsight and say, “That was dumb…”

Yeah. It was. But this is even dumber… and very few people in finance seem to care.

The most dangerous words in finance are, “This time is different.” That seems to be what people honestly believe… that THIS time paying people to borrow money in an even more destructive way will have zero consequences.

I invite you to explore this topic with me further in today’s podcast— you can listen in here: