047: The #1 reason why Donald Trump is the chimpanzee America needs 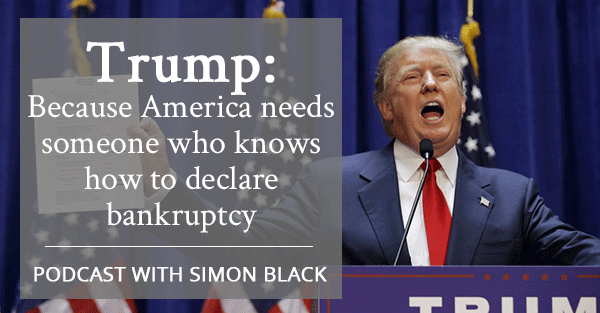 Just a few weeks ago, US talk show host Stephen Colbert was asked if he thought that Donald Trump had a chance of becoming President of the United States.

Colbert responded sincerely. “Honestly, he could. And that’s not an opinion of Trump. That’s my opinion of our nation.”

He’s right. The Land of the Free may very well be ready for something completely different. And Trump certainly seems able to deliver.

He is, after all, unique in his field. Donald Trump has never served in politics, and his blunt style is almost the exact opposite of every other major candidate.

But there’s one thing that really sets him apart, that, in my opinion, makes him the most qualified person for the job:

Donald Trump is an expert at declaring bankruptcy.

When the going gets tough, Trump stiffs his creditors. He’s done it four times!

Candidly, this is precisely what the Land of the Free needs right now: someone who can stop beating around the bush and just get on with it already.

As history shows, a default is inevitable.

The calculus is quite simple: when governments take on too much debt, they start having to divert a huge amount of their tax revenue just to pay interest.

This means that, at a minimum, the government has to sacrifice many of the promises they made to their citizens. They cut other programs in order to have enough money to pay interest.

But that’s not too popular. So instead they typically just borrow more money… until they’re borrowing money just to pay interest on money they’ve already borrowed.

This makes the problem exponentially worse.

Debt skyrockets. And soon the government is spending more on interest payments than national defense. (The US is almost at this point).

Eventually a bankrupt government has no choice: either default on their bondholders, or default on the obligations they made to their citizens. Or both.

This could take the form of a ‘selective default’. For example, the US government could default on the $2.4 trillion that it owes the Federal Reserve.

Or the $1.2 trillion that it owes China.

These are both possibilities.

But the prospect of default on “risk free” US government bonds would throw the global financial system into a tailspin; not to mention it would be the final nail in the coffin for the US dollar’s dominant reserve status.

Fortunately there are easier options for Uncle Sam.

The biggest debts that are owed by the US government are the obligations they owe to you.

Specifically, all the benefits like Social Security and Medicare they promised to American taxpayers.

The US government’s own numbers estimate these obligations at nearly $42 TRILLION, completely dwarfing what they owe China, or anyone else.

Then there’s the obligation they have to preserve the purchasing power of the $12 trillion held by the American people.

That’s the current value of the money supply in the United States right now.

History shows that debasing a nation’s currency is one of the easiest and most effective ways for bankrupt governments to plunder their citizens’ wealth, little by little over time.

As I explain in today’s podcast, the hard reality that most people don’t seem to get is that the US government is bankrupt.

This isn’t some wild assertion or conspiracy theory; their own financial statements show that the government’s ‘net worth’ is NEGATIVE $17.7 trillion.

And yes, the US is already borrowing money just to pay interest.

In fact the combined expenses of interest on the debt plus mandatory entitlements like Social Security nearly exceed their entire tax revenue.

In other words, you could eliminate nearly everything we think of as government– the EPA, the IRS, Homeland Security, etc. and it wouldn’t make a dent in the national debt.

When things get this dire, it doesn’t matter who sits in the chair.

You might as well elect a chimpanzee in the hopes that Mister Bubbles might accelerate the decline.

Donald Trump may very well be that chimpanzee. Especially given his unparalleled experience in declaring bankruptcy.

Nations that pass the economic point of no return can’t rebuild until they hit rock bottom.

And the US is way past that point. So let’s get on with it already and hit the reset button.

Join me for more in today’s podcast as I break down the details of the US government’s $60 trillion in liabilities– and what you can do about it.