1999 called, they want their stock bubble back… 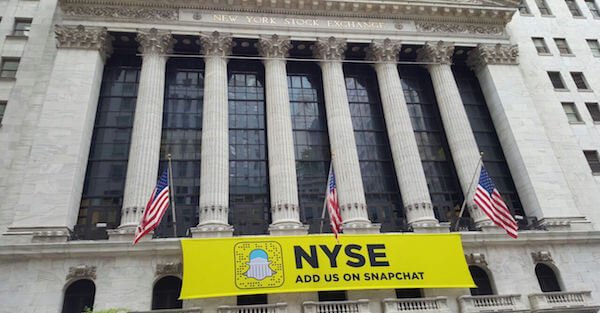 File this one away under “Completely Obvious…”

Snapchat, of course, is the photo-focused social networking app that’s adored by tweens and adults who still live with their parents.

(Talk about a lucractive demographic.)

The company IPO’d just a few months ago with a market capitalization of $30+ billion despite slowing growth and a history of never turning a profit EVER.

According to the company’s quarterly report its finances have gone from bad to worse.

Operating cashflow dropped from negative $92.5 million to negative $155 million; and its total loss for the quarter including stock-based compensation was $2.2 billion.

It’s incredible that this is the same company that was a Wall Street favorite just eight weeks ago.

In fact on its first trading day back in March, Snap’s shares surged 44% as investors clamored to own a piece of this loss-making company whose shares confer absolutely zero voting rights.

After yesterday’s horrific results, Wall Street seems to have woken up, and the stock tanked nearly 25% in after-hours trading.

It’s amazing that anyone believed in such a fantasy to begin with; it feels like the 1990s all over again.

During the ‘90s tech bubble, conventional valuation metrics went out the window.

Back then, Wall Street didn’t care how much money these ‘tech’ companies (i.e. websites) were making.

They only cared about “eyeballs”, i.e. how many visitors was a website getting?

If the site traffic was substantial, the company would IPO at some absurd valuation irrespective of how much money they were burning through.

The classic joke in the ‘90s tech bubble was “We lose money on every sale, but we make up for it in volume.”

Today we seem to have returned to the same madness.

All they care about is “Daily Active Users”, and they bet billions of dollars on a company based on this figure.

In fairness this isn’t really about Snapchat. Maybe the company figures out how to turn things around. Or perhaps they become the next MySpace.

But Snapchat is far from alone.

Netflix is another great example; as a consumer I love the service, but as an investor I think it’s a complete joke.

And the business is on pace to post a RECORD LOSS this year.

Netflix had 74 million subscribers at the end of 2015 versus 99 million today.

So Netflix appears to be losing money on every subscriber. Yet Wall Street seems to think that they make up for it in volume.

This really is the same madness from the 1990s.

Look I’m not here to tell you that Netflix stock is going to drop or that Snap will go bankrupt.

The larger issue is that financial bubbles tend to pop VERY quickly.

There is no financial fantasy that can last forever, whether you’re talking about unprofitable companies or governments that lose trillions of dollars.

And as the Snapchat stock collapse shows, when the public wakes up and realizes this may not be possible, the consequences can be pretty ugly.