Here’s what happened when they raised taxes 2,000+ years ago 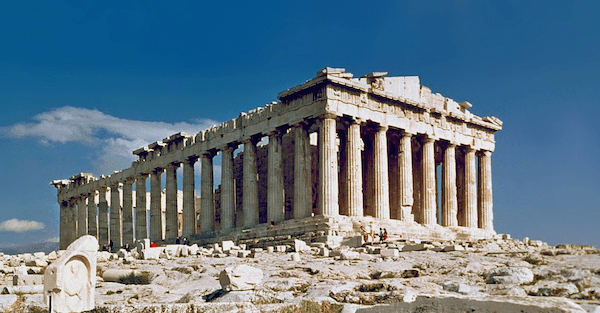 In 353 BC, as violent class warfare broke out across ancient Greece, one wealthy Athenian lamented in his journal,

When I was a boy, wealth was regarded as a thing so…admirable that almost everyone affected to own more property than he actually possessed. Now a man has to be ready to defend himself against being rich as if it were the worst of crimes.

Ancient Greece had become deeply divided at that point.

The opportunities from new ‘technology’ and new trade routes created a lot of wealth for many people. Others were left behind.

Plato called it “the two cities” of Athens — “one the city of the poor, the other of the rich, the one at war with the other.”

Eventually the poorer citizens were able to take over ancient Greece’s prized democracy. And, putting themselves firmly in control of government institutions, the new politicians came up with the most creative ways of raising taxes, seizing property, and redistributing wealth.

And even though the city-states were in a time of relative peace, the government continued collecting a special ‘war tax’ to fill its coffers.

But their methods weren’t working. The poor remained poor.

So the government raised taxes even more and ‘broadened the base’ to also include most of the middle class.

Meanwhile, commerce and economic growth ground to a halt. Anyone with any wealth, savings, or assets focused almost exclusively on protecting themselves against government confiscation.

In 355 BC the government established a new, special police force to seize assets and imprison well-to-do citizens.

Violent outbreaks became commonplace. Class warfare erupted. In the 4th century BC, the lower classes in Argos and Mytilene banded together and massacred over 1,200 wealthy citizens.

The ancient Greeks were so busy fighting each other over their own money that when Philip II of Macedon (Alexander the Great’s father) invaded Greece, he was practically welcomed as a liberator.

This is one of the themes from ancient history that keeps surfacing again and again: whenever there is a productive class, there are others who aim to steal from them.

I was recently speaking to a friend of mine from South Africa who co-founded a successful software company there.

He works his ass off and has done well for himself.

But he explained to me that his profits, in addition to the normal tax rate, are subject to penalties because the company shareholders don’t meet a specific, racial quota.

I find this totally idiotic.

Productive people… whether they start a business, design software, build a house, write a song, or work on an assembly line, create value. They create prosperity.

In some cases, they even create jobs.

This is exactly the sort of behavior that should be encouraged, not penalized.

Yet this trend persists all over the world, as it has for thousands of years.

Fortunately, there’s a multitude of options to do something about it– to take completely legal steps that dramatically and legitimately reduce the amount that you owe.

In my friend’s case, we talked through ways to use Double Tax Treaties (DTAs) to his advantage.

A DTA is an international agreement in which two countries agree on reduced levels of taxation in the event that their jurisdiction overlaps.

As an example, South Africa has a DTA signed with Hong Kong.

The agreement states that a Hong Kong company which generates certain types of income in South Africa will be subject to dramatically reduced rates than the normal South African tax.

So in theory my friend could move his software company to Hong Kong and collect royalties from South Africa at a tax rate of just 5% (which is stated in the treaty), instead of the 40%+ that he’s paying now.

Obviously there’s a lot of ‘i-dotting and t-crossing’ to make this happen. And this letter clearly isn’t intended to be tax advice.

It merely serves as an example that there are ALWAYS completely legal ways to reduce what you owe.

DTAs, by the way, aren’t some ‘loophole’. This is both national AND international law.

This is a tax that many governments collect on your assets when you die. It’s offensive… proving that the state views us as nothing more than dairy cows to be milked, even when we’re no longer alive.

But the estate tax is one of the easiest taxes to avoid — you can form a domestic trust, maximize gift tax allowances, redomicile to another state, etc.

The estate tax is so easy to avoid that many accountants call it the ‘stupid tax.’

And not doing something about it means that you’re literally giving away your money to the government.

That’s precisely the point: taxation is based on the principle that a group of out-of-touch politicians knows how to spend your money better than you do…

… and that they have some divine power to maximize social benefit with public funds.

This is obviously not the case. Most governments have a track record of serial failure when it comes to spending other people’s money: war, waste… and that $2 BILLION website for Obamacare.

We can all can come up with far more productive uses for our hard-earned savings than any government representative.

And given the innumerable ways to legally reduce what we owe, we have the power to do so.

If you haven’t taken these steps already, why not?