Take advantage of this free insurance policy for your savings 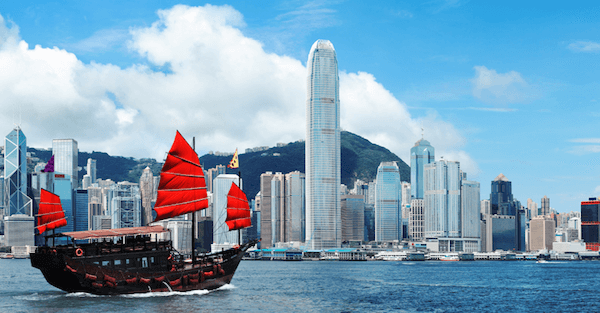 This is the very first article I’m writing to you on the brand new Macbook Pro that I just purchased here in Hong Kong.

Given that I actually run Linux on may laptop and barely do anything outside of word processing a bit of programming, the purchase was probably overkill. But I got such a great deal it was hard to pass up.

You see, Hong Kong has some of the best prices in the world on just about EVERYTHING.

That’s because Hong Kong charges ZERO sales tax or VAT. And there’s no import duty charged on products shipped in from overseas.

Nearly everywhere else in the world you’re going to pay some sort of duty, excise tax, and/or sales tax.

In Hong Kong none of that exists. So shopping here basically means receiving a built-in 10% discount from not having to pay any of the taxes and duties.

That’s why anytime I have a high-ticket purchase coming up (like a laptop or new mobile phone), I almost invariably wait until I know I’ll be in Hong Kong on business.

And Hong Kong’s generous tax model doesn’t stop with shopping; the region also boats one of the most competitive corporate tax rates in the world (between 15% and 16.5%), and extremely favorable individual tax rates that cap out at 17%.

Hong Kong is also a “territorial” tax system, which means that the government does NOT any tax income which is earned abroad.

You’d think that a place with such a minimal tax burden would be flat broke. And yet the Hong Kong government is awash with cash.

A few months ago, in fact, the HK financial secretary announced a budget surplus of HKD $92.8 billion– around $11.9 billion US dollars.

Remember that Hong Kong is a tiny place with a small population– so USD $11.9 billion is a lot of money.

If you extrapolate that amount to the US population, it would be as if the US government announced an annual budget surplus of $500 BILLION.

(According to the Treasury Department’s financial statements, Uncle Sam’s actual budget performance last year was an operating LOSS of $1.05 TRILLION.)

That’s their rainy day fund– roughly USD $16,000 for every man, woman, and child in the region.

Again, adjusted for population, this would be the equivalent of the US government reporting a $5.4 trillion fiscal surplus.

(Meanwhile The US Treasury’s financial statements show the government has a NEGATIVE net worth of MINUS $19 trillion.)

In the US, the annual reports for Social Security and Medicare indicate that both programs are massively underfunded by more than $40 TRILLION and will be fully depleted in just over a decade.

Comically the one thing that Hong Kong routinely screws up with its budgets is their estimates; the government consistently UNDERESTIMATES how big the surplus will be.

Last year, for example, they projected the current year’s surplus would be H$ 11 billion. It ended up being HK$ 92 billion.

When was the last time you remember that happening ?

In the West most major western governments haven’t run a budget surplus in years… even DECADES.

Greece just got bailed out again; that country is going on nearly a decade of being in perpetual financial crisis.

And across the Atlantic the US government breached its debt ceiling several months ago and has had to resort to ‘extraordinary measures’ to keep from defaulting.

By their own calculations the federal government is set to completely run out of money in just three months.

The most shocking part about that is how little anyone seems to care. You’d think this would be front-page news every single day. And in Hong Kong it probably would be.

It’s as if everyone has become numb to America’s pitiful financial state and arrogantly believes things can persist like this forever.

Of course, it won’t last forever.

The West is about debt and consumption. Hong Kong (and much of Asia) is about savings and production.

It’s really not difficult to see where this leads over the long-term.

If you understand this trend, one option to consider is holding a portion of your savings in Hong Kong dollars.

On top of being an incredibly low-tax jurisdiction, Hong Kong also boasts one of the most well-capitalized central banks in the world (the Hong Kong Monetary Authority, or HKMA.)

Whereas in the US and Canada the central banks are nearly insolvent, HKMA has massive foreign reserves backing up its money supply.

In fact HKMA has far more foreign reserves than there are Hong Kong dollars in circulation. That’s almost unheard of.

This makes the Hong Kong dollar a much safer alternative to most other fiat currencies.

But since the Hong Kong dollar is currently pegged to the US dollar, there’s minimal currency fluctuation.

If the good times last forever and the US dollar stays strong (or even rises), the Hong Kong dollar will rise with it. You won’t be worse off.

But should the US dollar ever start heading towards its intrinsic value, HKMA can discontinue the peg.