Update from Puerto Rico: People are running out of cash, ATMs aren’t working and groups of looters are posing as police 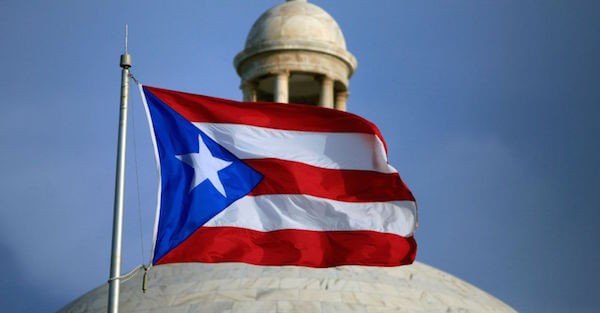 Adam and his family evacuated the island for the hurricane, but he’s been in close contact with his friends who stayed on the ground.

And the situation is bad.

According to his contacts on the ground, people in Puerto Rico are running out of cash. And ATMs aren’t working.

That’s how it happens during a crisis – food, gas, cash (all the things you need most) disappear first.

This is exactly why you keep several months’ worth of expenses in cash in a safe (a little gold helps, too). It’s a simple step you can immediately take to help keep you and your family safe during a crisis… And the tragedy in Puerto Rico shows you that crises do happen.

Adam also told me a mutual friend is pleading with him to call his government contacts and ask for guns. He wants them to fend off looters who are allegedly banding together into large groups and imitating police officers.

Puerto Rico is struggling right now. And it’s going to be painful as the territory rebuilds after Hurricanes Irma and Maria.

But Adam is going back after the storm. And I’m still hosting my Total Access members there in November.

The island is still there. Act 20 and Act 22 still exist. And there’s still tons of long-term potential in Puerto Rico. We’re doing our part to bring economic activity to the island and start the rebuilding process right away.

Changing gears, let me tell you about Adam and why he decided to move to Puerto Rico…

He built one of the most successful educational software companies in the world (you’d know the name if I told you).

But Adam and his equally hardworking wife, Hope, lived in Los Angeles for most of that time.

Every year, they’d make progress. And then every year, they’d get the bill: The federal government demanded more than a third of their hard-won success. The state government wanted an additional 9%, plus a franchise tax that increased according to gross income. Local taxes added up as well.

Adam and Hope were drowning in taxes.

Before we discuss how they solved their problem, let’s look at what they were dealing with:

California is one of the most punishing states in the country when it comes to taxes. The state is infected with parasitic idea that businesses owe the state a disproportionate amount for any success they experience.

In fact, an Op-Ed in the LA Times, published a week before Tax Day 2017, blazed the following headline across its pages: Instead of taxes, make corporations give the government stock.

MAKE corporations GIVE the government stock?

Another Op-Ed published in the same paper, three days before tax time, stated the following: America is a country where someone like Trump can become a billionaire. We need to change that.

Whatever your feelings about the president, this is absurd.

The tenor of such pieces states a clear message: Success is quickly becoming anathema in the US. We need to make it harder to come by. And the government is “owed” more and more for it.

At the moment, the United States’ corporate tax rates remain at 38.9%… one of the highest rates in the world.

And remember that in the US, corporate taxes are levied at the federal, state, and often local levels as well.

Being strangled by taxes, especially when you are just starting out and don’t have a lot of extra cash flow to invest back into your business, squelches growth. It often prevents entrepreneurs from expanding their product lines or market scope. It delays or thwarts the ability to hire other people… it hinders the ability to provide jobs to other taxpayers.

Adam and Hope finally had enough.

Now, they live in Puerto Rico… and they pay 4% in taxes. Period.

And, yes, they finally feel free.

Adam and Hope say they are happier now, with a richer and more satisfying social life, than they ever were in Los Angeles.

They were familiar with Puerto Rico before they moved. But only after hearing about Puerto Rico’s tax incentives, did they consider relocating…

Act 20, as it’s known, grants a 4% tax rate to businesses. Act 22 is tailored to investors and other individuals and allows for zero taxes on capital gains, dividends and interest earnings. In a nutshell, under Act 20, business owners who move to the island can slash taxes down to 4%.

The taxes looked attractive to Adam and Hope. But Puerto Rico looked like a war zone in the press. So they didn’t consider moving there.

Then they saw a video from Sovereign Man’s 2015 Cancun event, where I discussed the incentives with local experts.

They flew to San Juan a week later. And, no surprise, the media was wrong…

Puerto Rico was far from a war zone.

Adam and Hope calculated how much money they would save by moving to Puerto Rico, made one more trip to find a place to live… and then, on December 30, 2015, they started their new life in San Juan.

What they found, in addition to immense tax savings, was a community with a shared ethos. People who move to Puerto Rico for these incentives programs tend to be entrepreneurs with similar mindsets and drive.

And even though Puerto Rico is in a time of crisis… All of these opportunities still exist.

If you take the long view today, you can still save a fortune in taxes and live a high-quality life in Puerto Rico.

I’ll let Adam have the last word: “You don’t even think about the stress of dealing with tax details anymore,” he says. “You can just run your business and live your life. There’s tremendous freedom in that.”