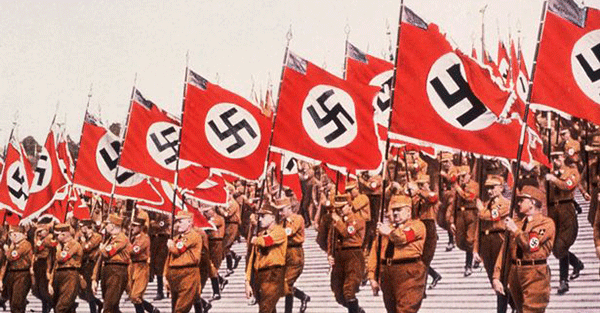 70 years ago, the United States of America had just emerged from World War II as the most dominant superpower in the world.

At that point America’s economy was the only one left standing.

And the US government had essentially dictated terms in establishing a new global financial system (known as the Bretton Woods agreement).

Doing so thrust the dollar at the center of world trade and banking.

Suddenly every government, central bank, and major corporation needed to hold and transact in US dollars… and to establish a banking relationship in the United States.

This gave the United States a tremendous amount of power—power they respected and never abused.

At the same same time, high ranking members of the Nazi party had fled to the four corners of the world, often with a vast treasure trove stashed away at Swiss banks.

Most of this wealth was acquired through mass genocide. And yet Switzerland’s secrecy laws protected Nazi clients from having their information turned over to authorities.

No one pressed the issue further.

Think about it—the US government could have done something.

Instead, in 1945, the US government gave the Nazis a pass.

This is extraordinary when you think about it. Because if you fast forward several decades, we see now that the US government is chasing people to the ends of the earth.

Even more, they’ve brought the full extent of their financial resources to bear against entire banking systems (including Switzerland’s).

They’ve successfully shuttered some of the oldest banks in the world, imprisoned foreign bank executives, and even gotten foreign governments to change their laws.

So who exactly are the nefarious criminal terrorists that Uncle Sam is spending so much effort to chase down?

Americans. Specifically, Americans who have failed to file administrative paperwork with the IRS to declare overseas financial accounts.

There are countless stories out there of people having their life savings confiscated by the government because they didn’t file a disclosure form (even if there are no back taxes due).

Certainly there is some meaningful percentage of these people who have been hiding undeclared income overseas hoping to never pay tax on it. And it’s important to acknowledge that.

But while this sort of behavior had been going on for decades, it took until 2010 for the US government to pass the Foreign Account Tax Compliance Act (FATCA), establishing the power to bully global financial institutions into compliance.

The reason is obvious: the United States government is broke.

Decades ago the future was bright. And they could afford to give the Nazis a pass. They didn’t really need the money, and it wasn’t worth abusing the tremendous financial power that they had been entrusted with.

But today, every penny matters.

The US government is in a position where they have to borrow money just to pay interest on the money they’ve already borrowed.

Their own internal numbers estimate their ‘net worth’ at MINUS $60 trillion, which includes their own estimates of long-term social security liabilities.

So they have no qualms about abusing the trust that the rest of the world has given them… or even creating new powers out of thin air through the most destructive legislation imaginable.

It’s often said that there are only a few times in a person’s life when you can really see what someone’s character is made of—typically times of extreme adversity such as being near death or flat broke.

That’s where the US government is right now. Enabling us to now see its true character.