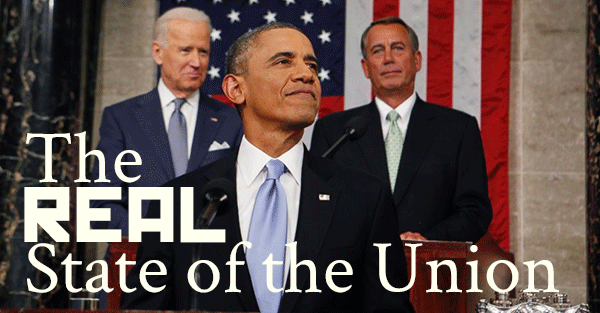 When President Obama ascends to the podium this evening to deliver his State of the Union address, he’ll undoubtedly shine a spotlight on the many strengths of America.

And to be fair, he’s right: the United States has a lot going for it.

The real issue, however, isn’t where the United States is today. The problem is where it’s going. And quickly.

Years of such absurd mismanagement and arrogance (FATCA, endless wars) are causing the US dollar to lose its clear dominance as the world’s currency of choice.

This will have enormous consequences for the US and Americans’ standard of living.

It won’t happen overnight, but the consequences are already unfolding. The train has left the station.

That’s precisely the point. It’s not where you are today, it’s where you’re going. And the trend is pretty obvious for anyone paying attention.

We know deep down that there are consequences to waging endless wars.

There are consequences to racking up $18 trillion in debt.

There are consequences to treating people like milk cows and regulating every aspect of their existence.

There are consequences to awarding total control of the money supply to an unelected central banking elite.

And the primary consequence is this: despite the enviable number of Starbucks and iPads per capita, Americans are working harder to make ends meet, and are far less free, than they used to be.

That’s not progress. It’s precisely the opposite (which I suppose is congress). And we haven’t even scratched the surface.

And thanks to this debt, plus all the wars, terrorizing of foreign banks, excessive money printing, spying, etc. America is rapidly losing its goodwill in the world.

The real consequences are not apparent yet. They’ll come when the dollar loses a substantial share of its global reserve status.

Make no mistake– it’s possible that could only be a few years away.

And despite all the obvious warning signs that we’ve been seeing for years, it’s going to catch most people with their pants down.

The truth is that you cannot fix your bankrupt government. But you can make a conscious decision to reduce your exposure to what’s obviously a failed system.

Standing in the street with signs and leaflets trying to raise awareness is a noble endeavor, sure. But it’s not going to change the system. It won’t make you more free.

Going to the voting booth is what we’re programmed to do, yes. But casting your ballot isn’t going to safeguard what you’ve worked for your entire life to build.

These are steps that you can take yourself.

You can choose, for example, to move your savings from a highly illiquid domestic bank to a new bank offshore that is objectively ten times safer, and pays forty times more interest on your savings.

You can begin using international structures to protect your assets and minimize your tax burden– legally slashing what you are currently forced to contribute in order to fund their wars and illegal spying.

You can look into establishing an alternative residency, so that if things get so bad that you need to leave, you’ll already be set up. You might even want to explore investing and doing business in thriving places around the world.

These solutions all make sense no matter what happens.

Even if you don’t agree with my assessment of the State of the Union, you’re not going to be worse off if you take some basic precautions and hedge your bets.