25% of Millennials no longer having sex due to financial problems 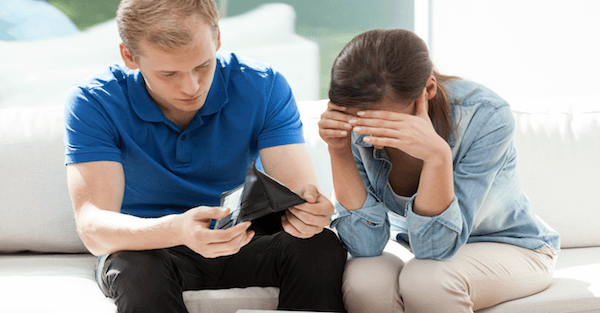 My grandfather was just a toddler when soldiers came home from World War One in 1918.

They brought the deadly Spanish Flu with them, which killed well over 50 million worldwide.

As a young adult, my grandfather struggled through the Great Depression with the rest of the world.

And just as things started looking up, World War II broke out.

Lucky for me, he survived it all.

After the war, my grandfather took a job as a teacher. And on that single salary he was able to buy a house, provide for his family, afford a car, and have a secure pension for when he retired.

His wife (my grandmother) started a small hair salon in the family living room to earn money on the side.

They saved nearly every penny they ever earned. They never went into debt.

And they invested conservatively, often buying short-term government savings bonds that paid  over 4% by the late 1950s– well above the rate of inflation.

This wasn’t just my grandparents’ experience either.  Back then, this was the fundamental promise of America: you were rewarded for working hard and saving money.

But now things are entirely different.

For starters, cost of living is totally out of control. My grandfather’s teaching salary was more than enough to support his family in a comfortable, middle class lifestyle.

Today that would be almost impossible.

More often than not, it takes two working parents to make ends meet in a typical household.

Plus, to even qualify for a lot of jobs today, you must have a university degree… which carries its own enormous costs.

Even after adjusting for inflation, a typical university education in the US costs over five times as much as it did in 1960, according to the National Center for Education Statistics.

Speaking of debt, my grandparents had none. And they had plenty of cash savings, as was typical of their generation.

But today’s median household (according to Federal Reserve data) has racked up consumer debt exceeding $30,000, with a bank balance of less than $5,000.

And that bank balance earns a pitiful interest rate of just 0.02%. So even for people who have savings, the interest they earn doesn’t keep up with inflation.

Housing costs are also out of control.

Home prices are near record highs, making it extremely difficult for young people to afford a  down payment.

And rents have been steadily rising for years, far outpacing the rate of inflation (and lackluster wage increases.)

Perhaps that’s why a survey from Zillow last year found that nearly 25% of 24-36 year olds were living with their parents. They simply can’t afford their own housing.

Coincidentally, a study from the University of Chicago last year showed that roughly 25% of people in their 20s reported having zero sex in the previous 12 months, almost the same amount as people living with Mom and Dad.

While this might sound comical, it matters: young people are putting off children as well.

In fact, the US fertility rate is now at its lowest level in DECADES, well below the amount necessary to maintain a stable population.

It’s simply too expensive to have kids.

When my grandparents started having children, the hospital bill was about $100.

Today it can easily be more than 100x that amount. And the cost of rearing a child today through the age of 18 can now exceed $200,000, not including university tuition.

Then there are retirement challenges as well.

Back in my grandparents’ era, it was common for workers to have well-funded private pensions.

Today private pensions are nearly extinct. And of the few that still exist, about 25% are insolvent.

Public pensions (as we discuss frequently) are in terrible condition, with a mutli-trillion dollar funding gap worldwide.

And then there’s Social Security, which is in such financial ruin that even the Social Security Administration admits the program’s trust funds will run out of money in 2034.

I also think back to how easily my grandmother was able to start her own hair salon. She bought a pair of scissors one day and started cutting hair in her living room. Simple.

Today you’d have to navigate a mountain of permits, licenses, bureaucracy, and legal liability, the cost of which is prohibitive for most people who dream about starting their own business.

Unsurprisingly, Census data show that the number of new startups in the US continues to decline.

This is a long way from the original Promise of America, where the average person could work hard, save money, and afford to retire.

Today, the system is no longer designed to provide any of that.

Wages and savings don’t keep pace with inflation. Debt has exploded. People are working harder and becoming less prosperous. And retirement is anything but secure.

These problems can’t be fixed in a voting booth. Or by waiting for the Bolsheviks to engineer prosperity for all. And certainly not by following the status quo.

A better solution is to walk a different path altogether– one of self-reliance and independence.

For example, you CAN secure your retirement. Not by relying on a broken pension, but by taking matters into your own hands with a more robust structure like a solo 401(k).

You can obtain a top quality university education by studying abroad at a fraction of the price.

You can start a new business in a tax-advantaged jurisdiction (like Puerto Rico, where you can pay just 4% tax on your profits).

There are countless solutions to fix these challenges. It just takes a little bit of education and the will to take action.