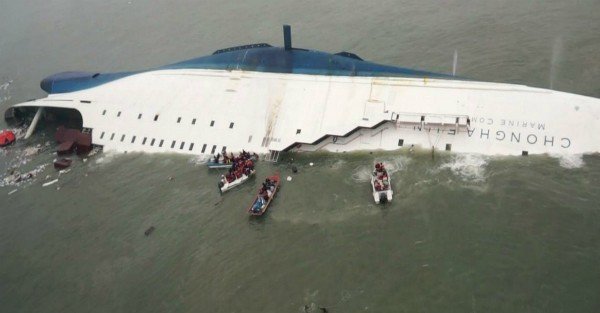 Thirty-six year-old Koo Bon-hee recalled hearing a loud bang, when suddenly the ferry he was on tilted drastically in the water.

The Sewol ferry, traveling from Incheon to Jeju Island in South Korea, was starting to sink, and it was sinking fast.

Those still standing after the impact began to scramble for the exits, when they heard an announcement over the speakers telling everyone to stay in their places and sit still.

Some, like Koo, followed their instincts and ignored the announcement, leaping into the icy cold water where they were able to be rescued.

Others heeded the announcement and remained sitting inside the cabin, waiting for further instructions.

One young girl called her mother and said, “We’re putting on our life vests. They’re telling us to wait and stay put, so we’re waiting…”

This young girl still hasn’t been accounted for.

An entire ship full of passengers dutifully followed the instructions set forth by the crew. The ‘experts’ told them what to do.

Yet as it turned out, the ferry quickly became submerged. And following orders cost many their lives. 302 are either dead or missing.

Koo, lamenting the others’ failure to escape said, “We were wearing life jackets. We had time… If people had jumped into the water … they could have been rescued. But we were told not to go out.”

Just like Sewol, many countries in the West are sinking, and it’s up to you whether you sink with them or jump ship while there’s still time.

You can see the desperation as governments have already begun to freeze assets, impose capital controls, seize private pensions, and tax bank transfers.

They’re using any justification they can conjure to award themselves even more desperate powers to stay afloat.

Regular citizens are being accused of being money launderers and tax evaders, having to prove their innocence in order to keep their own money.

Governments are exercising unprecedented authority over our bank accounts, even going so far as to openly suggest ‘one-time levies’ on people’s life savings.

But despite their best efforts, they won’t be able to remain above the surface much longer.

People may think you’re crazy for wanting to make an escape. “It’s just a bit tilted”, they say.

But in reality most Western countries are far beyond the point of no return. They are nearly submerged, with little hope for recovery.

As debt continues to rise swiftly, GDP has barely budged.

It’s no wonder why ratings agency Fitch lists a third of European countries with a negative rating. Had that been the case back in 2007, people would have been panicking all over the place.

Those who stayed on the Sewol ferry trusted the authorities when they announced that ‘everything was under control.’

Just the same, politicians keep telling us that they’ve got things under control.

If they can do just one more stimulus injection, then the resulting GDP growth will make up for all the debt they’ve been incurring.

Or if they can just freeze capital in the country for a short period of time, they’ll be able to fix the system.

None of this will really make a difference, and none of it will save the ship.

Right now it’s not too late. You can still grab a life vest and escape an obvious conclusion.

Of course, we’re told that doing so is cowardly. The propaganda says that we have some moral obligation to stay on board the ship and obey their ‘authority’.

Our obligations are to our loved ones—not incompetent politicians or ship captains.

We have the time now to get ready. We can help our families put on their life vests and make it to safety.

But the water is rushing in fast, and the last chance to jump is approaching.