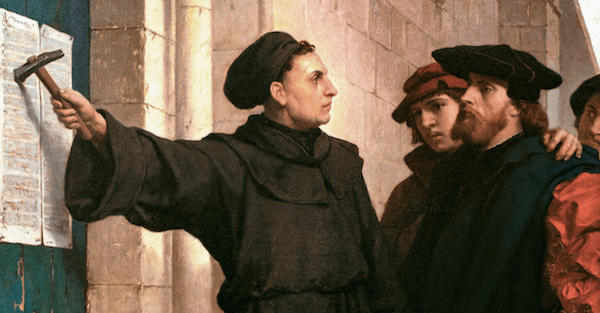 500 years ago to the day, on October 31, 1517, a German monk of the Augustinian order named Martin Luther sent a letter to his Archbishop expressing concern about certain practices of Church officials.

In Luther’s era it had become typical for clergymen to sell ‘indulgences’ to anyone who wanted to be pardoned for sins.

Martin Luther felt this practice was a terrible affront to Christian doctrine, so he sent a letter up the chain of command outlining 95 logical points in his argument.

Luther’s letter was hardly a revolutionary work. He was polite. Formal. Almost apologetic.

He actually asks forgiveness of the Archbisop for having “dared to think of a letter to the height of your Sublimity.”

And yet this letter is responsible for kicking off one of the most important social transformations in all of human history, what we now call the Protestant Reformation.

The Reformation was ultimately about rejection of central authority… specifically, the Church.

When the fall of Rome in the 5th century AD left a power vacuum across Western Europe, it was the Catholic Church that stepped in to fill this void.

By the 1500s the Church had firmly cemented its influence over nearly every aspect of life– commerce, politics, economics, family affairs, war, social trends, etc.

At the core of the Church’s power was its theological monopoly.

Remember that the Bible was written in Latin back then… a language that few commoners could speak, let alone read. So Church officials had uncontested control over their flock.

Imagine that benevolent space aliens came to Earth tomorrow morning brandishing a book filled with hidden secrets of the universe.

Sounds exciting. Except that the book is only written in their alien language. So anyone who wanted to understand the secrets would have no choice but to listen to the aliens.

The Church had this same authority 500 years ago… though there was already a growing constituency that had become tired of blind obedience.

Martin Luther became the champion of Catholics who were weary of Church authority.

He was immediately viewed as a threat by the Pope in Rome, and Church officials ordered their top scholars to refute Luther’s arguments.

Luther responded by writing a short, simple explanation of his views in the local German language so that common people could read it and understand it.

It was incredibly popular and widely circulated… which infuriated the Pope even more.

With the Church’s every effort to silence and malign Martin Luther, he responded with more simple, German language essays for the locals.

His popularity grew. Young people flocked to his aid, to the point that they seized and destroyed some of the Church’s anti-Luther propaganda.

By the time the Church excommunicated Martin Luther in 1521, he was already a hero and symbol of the revolution.

The following year, Luther’s German-language translation of the New Testament was published.

It was revolutionary. For the first time in 1,000 years, people had the resources to reject Church authority and explore their own spiritual beliefs.

Suddenly there was no more middle man standing between an individual and his relationship with a higher power– it was the ultimate in decentralization.

The printing press had already been around in Europe for several decades. But it wasn’t until Martin Luther that the invention factored so heavily into social change.

With this powerful technology at their disposal, Luther and his followers were able to rapidly publish their ideas (including the German-language Bible) and spread them across the continent faster than had ever been achieved before.

I thought this was appropriate to bring up today because, on the 500th anniversary of Martin Luther’s 95 Theses, the echoes of history remain with us… and it’s easy to see similar examples of decentralization and rejection of authority underpinned by game-changing technology.

Over the past several years, for example, there have been a number of revolutions (starting with the Arab Spring movement) supported by relatively new technologies like social media and mobile mesh networks.

But perhaps the most prevalent example today is Bitcoin and the blockchain.

Cryptocurrencies represent the antithesis of the traditional monetary system.

While our dollars, pounds, pesos, and euros are all highly centralized and under the total authority of unelected central bankers, cryptocurrencies are decentralized.

There is no central authority with Bitcoin. Its value is determined by the market… its community of users, not some bureaucratic committee.

And whenever there is disagreement within the community about a cryptocurrency’s fundamentals or technological limitations, participants have the option to split off on their own.

This is known as a ‘hard fork’. And Bitcoin alone has had a few so far.

Bitcoin Gold and Bitcoin Cash both have technological differences from the original Bitcoin. But the larger point is that the community can choose which one they want to follow.

(I wish traditional currencies could fork; that Greece and Germany are in the same monetary union suggests that the EURO is in DESPERATE need of a hard fork.)

For some reason the media always makes a big deal about these forks, viewing them as a weakness.

They’re wrong. It’s a BIG strength. And it’s quite common in software.

GNU/Linux is an operating system kernel, for example, that has forked countless times since its creation.

Today there’s Redhat Linux, Debian, Ubuntu, Fedora, Kali, CentOS, and dozens of other distributions. Each has its own particular strengths and weaknesses.

But the user is free to choose based on his/her specific needs.

Microsoft Windows, on the other hand, is 100% centralized. The user has no choice.

Forks are crucial for any idea to evolve… which means the concepts behind crypto will only get better.

This is just the beginning. The monetary revolution is absolutely underway. And at a minimum, it’s worth learning about.