About that “strong” dollar 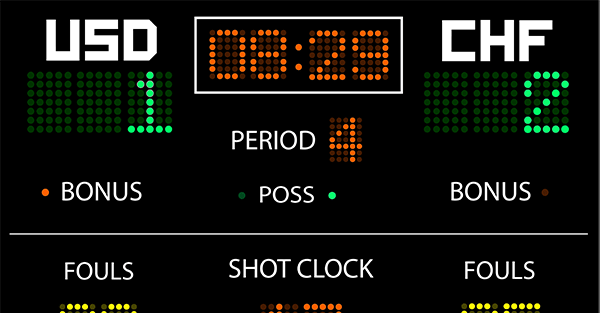 I’ll admit that I wasn’t much of an athlete as a kid, at least in any traditional sport.

(I famously struck out a tee-ball when I was five years old, managing to hit the stationary tee three times in a row. I’m not sure this feat has ever been duplicated before or since.)

But my parents still enrolled me in all the local sports leagues ‘til about sixth or seventh grade– you know, the ones where they have to put your kid in the game as long as you pay the dues.

Fortunately (or rather unfortunately) they lumped all the sorry kids onto the same basketball squad. Strength in numbers— we all sucked together.

And, bearing in mind this was the 80s, our opponents wasted no time pulverizing us into dust, then rubbing our noses in defeat.

Every single game was like a bad Karate Kid sequel… except more guys in skeleton costumes without the climactic Crane Technique victory at the end.

Occasionally (by which I mean rarely), one of us would miraculously score a basket.

This was a momentous achievement for us, and one that would be wholeheartedly celebrated by the entire team.

And invariably there would be someone from the opposing team who would jog by and snarl some pithy 80s sports metaphor, my favorite being “Scoreboard.”

Now, if you’re not a native English speaker, “scoreboard” is an idiomatic expression generally employed by some gigantic douche-bag to remind people that he’s still winning.

I’ll use an example: “Yeah, the US has $18 trillion in debt and a central bank that’s nearly insolvent… but you know what? Scoreboard.”

The point being that the dollar is ‘strong’ right now relative to other currencies. A number of currencies from the euro to the Japanese yen, for example, are all near multi-year lows.

So, who cares about the dollar’s weak fundamentals because it’s so strong right now. Right?

Central bankers around the world have conjured trillions of currency units– dollars, euros, yen, etc. And those currency units have to find a ‘home’ somewhere.

But if you’re sitting on hundreds of billions, you have to find a safe place to park it.

It used to be you could just park it in some western government bond and walk away for a nice dinner and a movie.

Not anymore. Now you have to be constantly worried and alert.

Because in an instant, the US government could shut down again. Japan could default on its prodigious debt (in excess of 200% of GDP). The eurozone could come apart.

Any number of things could happen.

And as a result, capital regularly shifts from one major currency to another based on the market’s assessment of risk, i.e. which one is the ‘least ugly’ right now.

At the moment, the US dollar is choice.

This isn’t necessarily a vote of confidence for the dollar. It’s more like a vote against all the others.

But this is a decision that can and will be changed in an instant. Just look at the Swiss franc.

Since September 2011, the Swiss National Bank (SNB) had essentially put a ceiling on the appreciation of the Swiss franc with respect to the euro.

The franc had been rising for months. And I predicted in July 2011 that the SNB would intervene with some sort of controls.

They did, shocking the world with this statement on September 6, 2011:

“With immediate effect, [the SNB] will no longer tolerate a EUR/CHF exchange rate below the minimum rate of CHF 1.20. The SNB will enforce this minimum rate with the utmost determination and is prepared to buy foreign currency in unlimited quantities.”

Investors yanked their money and the franc dropped like a stone.

But a few days ago, the SNB reversed this control. They are now no longer limiting the rise of their currency.

And the franc soared 10% almost instantly– a HUGE move for a major currency.

Why did this happen? Because in a universe of options that only includes the dollar and euro, the dollar wins.

But if you expand that universe even a little bit to include the Swiss franc, suddenly the real truth comes out.

Investors have far more confidence in Switzerland than the United States. They’d rather hold francs.

The next one to watch is the Hong Kong dollar.

Right now the HK dollar is pegged to the US dollar. But I’ve said it before: there may likely come a day when the Hong Kong Monetary Authority stops importing US monetary policy and abandons this peg.

We’ll see the same immediate surge. And anyone holding HK dollars will have a lot to gain.