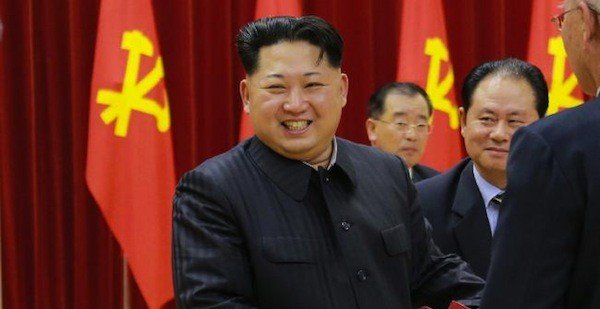 If you believe the official propaganda, no other nation in the history of the world has advanced the cause of humanity more than North Korea.

According to the North Korean Ministry of Truth, their great nation has cured cancer, ebola, AIDS, SARS, MERS, and much more.

Now they’re saving the world again, this time having invented an extra-strength adult beverage that won’t leave you feeling like a train wreck in the morning.

Clearly this is an idiotic fantasy.

Alcohol has chemical properties which have a severe physiological impact on the human body when consumed in excess.

If you drink too much alcohol, there are consequences. Both short-term and long-term. Simple.

Yet the North Korean government is deceiving an entire nation of devout followers that they have invented a cure-all panacea.

Drink as much as you want and don’t worry about the consequences!

Now, we can poke fun at North Koreans’ gullibility.

But frankly I don’t find the idea of ‘hangover-free alcohol’ any dumber or less deceptive than the idea of ‘consequence-free debt’. Or the idea that you can print your way to prosperity.

North Koreans may be delusional enough to believe their government. But so are most Westerners.

People in the ‘advanced’ world believe crazy fantasies all the time.

We’re told that the national debt doesn’t matter, nor does it make the nation poorer, because “we owe it to ourselves.” (Nobel Prize winner Paul Krugman, 9 February 2015)

It’s as if the federal government being unable to pay the debts it owes to Social Security recipients, or to bank depositors in the US, is somehow less ‘bad’ than stiffing China.

We’re told “the State of our Union is strong” (Barack Obama, last week).

Yet trust in government is near an all-time low, wealth inequality is extreme, the Middle Class is no longer the clear majority in America, and the national debt is at an all-time high of nearly $19 trillion.

We’re told that “Medicare and Social Security are not in crisis” (Barack Obama, 13 July 2015).

Yet the annual report from the Treasury Secretary of the United States tells us that one of the programs’ major trust funds is completely out of cash, and the rest are running out.

… because apparently there are absolutely zero consequences when the Federal Reserve conjures money out of thin air.

Except that there are consequences. Every dollar the Fed prints weakens its balance sheet and pushes it into insolvency.

In fact, the Fed’s own weekly financial report shows that its level of capital is a pitifully small 0.8% of its total assets. In other words, the Fed has almost zero margin of safety.

And on a mark to market basis, the Fed is already insolvent.

Yet the Federal Reserve claimed in a November 2014 white paper that its own insolvency “would not create serious problems,” as if decades of wild partying with their printing presses would be consequence free.

Western newspapers are certainly having a chuckle today at North Korea with headlines making fun of the hangover-free alcohol hoax.

But just imagine the fun they’d have if Kim Jong-un announced to the world that he had invented ‘consequence-free debt’ or a perpetual money printing machine.

Western media would have a field day with such propaganda, arrogant and clueless that this is already our own reality.

But in the West, we believe the biggest lies of all… that you don’t actually have to do anything, that your nation can simply print and borrow its way to prosperity until the end of time.

All lies eventually collapse, and reality settles in.

Given the panic in global financial markets just in the first few weeks of 2016, that reality may be quickly approaching.