After three days without water in Chile 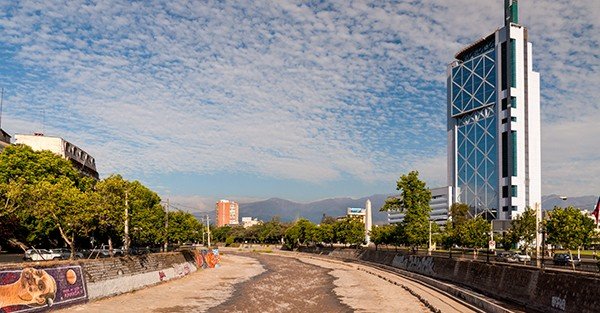 Over the weekend, just as I was arriving back to Chile after a few weeks away, the sky above Santiago opened up and started to dump heavy rain on the city.

I was already in the car on the way down to one of our farms once the rains began.

But apparently the downpour was so heavy it caused an epic, almost biblical flood of some of the major rivers in the area.

It was pretty nasty in Santiago; the city just isn’t used to rainfall of that level.

Parts of one of the main highways were totally submerged. Major retail and office buildings were flooded and had to close.

The power grid went down sporadically in a lot of neighborhoods.

And the city’s water system virtually shut down, so millions of people had to go a few days without access to running water.

I’m not trying to paint a picture of chaos and pandemonium; Chile has seen its share of natural disasters, and they tend to deal with such things in a civilized manner.

But still– who wants to go a few days without access to water and electricity?

It’s easy to take basic utilities for granted when all we have to do is flip a switch and the lights come on… or turn a faucet and water comes out.

A lot of us have grown up in an environment where we’ve never even had to think about the enormous effort from thousands of people and millions of tons of resources it takes to make that happen.

That is, of course, until the power and water go out. Then we start thinking a lot about it.

It’s like health, in a way. Few people wake up feeling grateful for being in good health that morning.

But the moment illness strikes we long for that feeling of wellness.

In my case, the flooding didn’t affect me at all. We got a lot of rain down here at the farm, and the power went up and down sporadically, but it didn’t matter one bit.

In addition to generating a healthy commercial profit, the farm where I am right now can also produce its own food, water, and electricity.

In fact, most of our farms are totally self-sufficient in this way. And it just makes a lot of sense.

Being self-sufficient means that no matter what happens in the world, we’ll be able to deal with anything from a position of strength.

But as we discussed yesterday, part of being a Sovereign Man is having a strong sense of independence and self-reliance.

From a financial perspective, that doesn’t necessarily mean being super rich, but rather educating one’s self to build an independent source of income.

It also means having greater independence from the banking system so that you have more control over your savings.

(This is why I’ve long recommended holding physical cash and precious metals, rather than keeping 100% of your savings in a bank with shaky fundamentals.)

From a personal perspective, this concept of self-reliance also means taking steps to reduce your dependence on the big grid.

I feel a bit strange saying this, because I’m not a doom-and-gloom, ‘the end of the world is nigh’ sort of person.

I’m actually quite optimistic about the world and all the opportunities I’ve seen traveling to 120 countries.

But the world is certainly changing, and that carries a degree of risk.

The big titanic governments that ruled that past are rapidly going broke. That, too, carries a degree of risk.

And as our experiences in Chile over the weekend attest, sometimes the unexpected happens.

As a Sovereign Man, I’d rather be in control of my own fate.

And that means not having to depend 100% on the complicated logistics of transporting coal across the country in order for the lights to come on.

If that system works, I can still use it. If it doesn’t work, it won’t affect me.

This is not to say that everyone should live on a self-sufficient farm and grow their own food (though it is a very nice lifestyle).

Start small. And cheap. Buy some bottles of water and store them some place in your home, out of sight and out of mind.

Or even still, just fill up some old bottles with tap water. It’s practically free.

Don’t feel weird about it– it’s not crazy to keep a little bit of extra water around the house at almost zero cost. And you certainly won’t be worse off for having it.

It’s like holding a bit of physical cash: there’s basically zero cost for doing it.

But in the event that any of these risks become a reality, it’ll be one of the smartest things you do.