Always remember who you’re dealing with 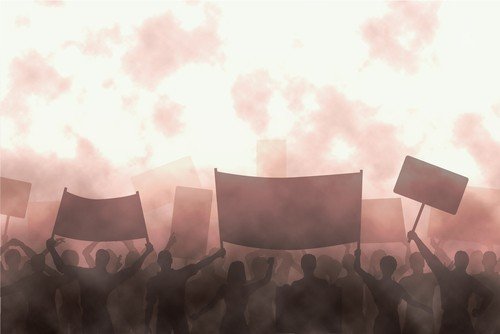 The two couldn’t be in a starker contrast—the serenity, peacefulness, and jovial atmosphere of the fourth Thursday of November, and the mayhem, mind-numbness, and scavenging that follows the next day.

How can often the same people that on Thanksgiving are spending time with their families in a holiday spirit, in a blissful and calm environment, just hours later transform into wild creatures that run around like wounded predators desperate to hunt, is a mindful reminder of who exactly you’re dealing with.

What should be the start of a reflective holiday period instead turns into chaos on Black Friday when promotional sales of the holiday shopping season kick-off.

And the incidents are just getting more dramatic year after year.

This time people were fighting at Wal-Marts over $1 DVDs when the sale started. A fight broke out over a toaster that was $2 off. Grown women were fighting over a sweater. An air mattress. Six grown-up guys started a fistfight over an Xbox 360. People are fighting over bathmats, towels…

These are the clearest arguments of how hollow Ben Bernanke’s remarks were during the dinner I attended recently in Washington D.C., when he said that the Fed doesn’t have much influence on the growing wealth gap in the country.

In reality, however, keeping interest rates at zero and printing billions of dollars a month couldn’t have a bigger impact—those with an established capital, the bankers, the ultra-wealthy, are seeing their portfolios rise to record levels while the middle class is getting hosed with rising costs of everything, from food to medical care, fuel, and education.

No wonder people are scavenging around and fighting over a toaster that’s $2 off.

Now imagine what happens if things get much worse. Right now everything seems normal. Sure, life is getting harder for ordinary folks, but everything still functions like usual.

What happens when a major event causes the inevitable day of reckoning and the US dollar falls off the edge of a cliff where it’s tethering right now?

What will you do? How will you react? Where will you go?

Exactly 12 years ago Argentina was tethering on such a brink. At the end of November everything seemed normal. The economy was in a bad shape but life muddled through.

In a matter of days at the beginning of December, however, bank withdrawals were limited, people’s accounts were frozen, angry mobs took over factories, closed roads and bridges, forced the President to flee in a helicopter, and caused dozens of deaths amid violent riots.

The currency was toast and the Argentines had to resort to barter.

Having objective foresight and taking steps to prepare and protect yourself is crucial. And the best part is—it makes sense no matter what. You’re not worse off by putting some of your savings in a safer bank overseas, or acquiring residency in a thriving economy.

That’s why I urge you to pay attention to tomorrow’s unique offer we’re opening up. It’s something we’ve never done before and is quite easily the most straightforward, no-brainer opportunity you’ll ever have to protect yourself from people fighting over appliances and stampeding each other.