Are you descended from the Visigoths? Get ready to pay up! 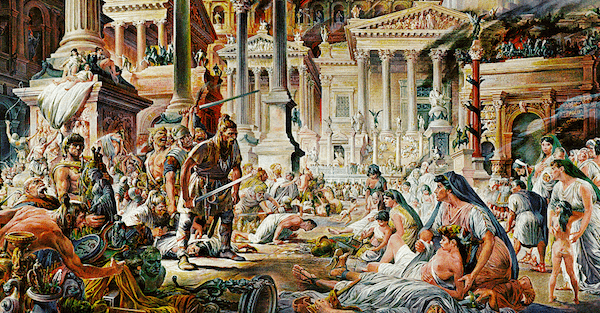 Get ready for a slippery slope, because because Cory Booker just introduced a reparations bill in Congress.

The 2020 Presidential contender said, “this bill is a way of addressing head-on the persistence of racism, white supremacy, and implicit racial bias in our country… and propose solutions that will finally begin to right the economic scales of past harms…”

If that’s the route America wants to go, seems like they should start with Native Americans. After all, they were the first ones to be exterminated and have their land stolen. And, comparatively speaking, they’re at the bottom of the socioeconomic ladder.

While the rest of the US enjoys historically low unemployment, the unemployment rate on Indian Reservations often exceed 10%.

Native Americans also have the highest poverty rates of any ethnic group in the Land of the Free.

Should the US government make reparation payments for killing countless Filipino civilians in the early 1900s during the armed occupation of the Philippines?

Or to descendants of Japanese-Americans who died in internment camps during World War II?

And, how far back should politicians go ?

Should the government of Mongolia make reparation payments to Ukrainians for murdering tens of thousands of people during the siege of Kiev in 1240?

Should descendants of the Visigoths have to give money to Italians for the sack of Rome in 410?

We doubt this bill will ever see the light of day. But it’s yet another striking indicator of what the Bolsheviks are thinking.

The Transportation Security Administration (TSA) is already pretty legendary for touching passengers in intimate ways… and it often crosses the line.

In one important case, an airline captain was apparently given a swift ‘karate chop’ to his manhood during a TSA frisk back in 2016.

According to court documents, the TSA agent was irritated, and admitted that he deliberately struck the captain’s groin during the pat-down.

Federal law prohibits government agents from being sued in the performance of their duties– even if they commit assault and battery.

But the airline captain (James Linlor) sued anyway, on grounds that the TSA violated the 4th Amendment of the Constitution which protects against unreasonable searches.

This case is now going to the Supreme Court; and it will be an important one… because, if Linlor is victorious, it will establish a clear precedent that government agents can be sued when they cross the line.

Every year countless musicians descend upon Nashville to stake their claim on the country music scene.

With such massive demand, thousands of home recording studios flourish. But now the city is threatening them all.

Nashville bans home businesses from allowing clients in the home. This rule applies for anyone working from home, whether a hairdresser, massage therapist, or music producers.

But one man is suing.

Officials decided to shut down his home recording studio, threatening daily $50 fines and possible jail time if he refused. They even tried to force him to remove equipment from his home, submit to home inspections, and remove YouTube videos recorded in his studio.

The Institute for Justice will help him argue that the regulation is an unconstitutional restriction on his right to earn a living.

It is absurd that in a music capital like Nashville, the government claims the authority to prosecute musicians for recording a jam session in the wrong place.

Ecuador recently expelled Julian Assange, the founder of Wikileaks, from its embassy in London.

He had been living there with asylum since 2012, fearing extradition to the United States.

Assange helped leaked top secret information exposing US war crimes in the middle east. And last year it was revealed that the US indeed filed a sealed indictment against him.

Now he will be extradited to the Land of the Free to face charges related to computer hacking.

But the timing of Ecuador’s revocation of his asylum raises some suspicions.

Less than two months before Ecuador expelled Julian Assange from its embassy, it secured a $4.2 billion loan from the International Monetary Fund (IMF).

The last time the IMF gave a loan to Ecuador was 2016. That was only $364 million, and it was to help them rebuild after a devastating earthquake.

The USA is the largest shareholder in the IMF (and is known to use cash to exert international pressure).

The timing seems a little too perfect to be a coincidence.