Argentina: You won’t believe what law the government just passed 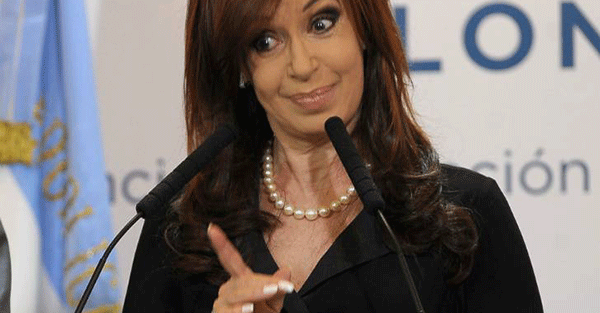 In the pantheon of utter political stupidity in our time, the competition is pretty fierce to see who ranks #1.

But I have to imagine that, even with so many rivals, Argentina’s Cristina Fernandez de Kirchner makes a pretty compelling argument to be the champion.

And though the productive class of Argentina is no stranger to being vilified by a populist government whose grasp on power rests on praising the dignity of poverty, Cristina has managed to take things to an entirely new level.

Exhibit A: Argentina’s new ‘supply law’, or Ley de Abastecimiento, due to take effect in December next year.

Under this new law, the government will have the honorable burden of defending consumers from greedy producers.

Companies are now prohibited from setting their prices too high, generating too much profit, or producing too little.

And unlike the country’s astronomically high taxes (which at least have defined numbers and penalties), the new supply law doesn’t even say what is meant by too high, too many, or too little.

It simply reinforces the government’s unchecked power to arbitrarily audit, fine, shut down, and expropriate production of private companies.

Argentina’s government has already been maintaining “voluntary” price controls on over 400 consumer products for the past year, all in the name of combating the inflation that they themselves created.

And as any high school economics student can tell you, price controls create… SHORTAGES. Duh.

Needless to say, local production of these staple consumer products has dropped as a result of price controls. And given the pitiful state of the peso, they’re too expensive to import.

And anyone who can actually get their hands on these products—sugar, cooking oil, canned fruits, cleaning products, etc. often strolls across the land borders into Paraguay and Brazil where they are sold at competitive market prices.

Argentina’s new law of clamping down supply-side control echoes Venezuela’s 2011 “Fair Price and Cost Law”, which instead of reigning in inflation has reduced the Bolivarian state to the continent’s preeminent example of failure

Throngs of Venezuelans now line up around the block for days to buy single-ply toilet paper at a “fair” price. Argentina is not far behind.

This isn’t even about the country being “leftist” or “socialist”.

What has destroyed the country is not the high taxes or government waste (although that certainly doesn’t help). Argentina shoots itself in the foot by passing laws that call into question legal certainty and basic property rights.

All of this exacerbates unquantifiable country risk and the inability for businesses and individuals to plan ahead—in any environment.

If you think Argentina is an aberration, think again.

Just as Argentina used to be one of the richest places in the world and Buenos Aires competed with New York for the brightest and most talented minds on the planet, many Western countries are going down the same road.

They create absurd and confiscatory tax systems and regulations. They condemn companies who have a fiduciary responsibility to their shareholders – not governments – and follow THEIR OWN LAWS to legally minimize their tax obligations.

The seize, steal, kill and regulate every aspect of our private and economic lives. And they even have to resort to such comical measures as in Europe where they now count illegal activities such as spending on drugs and prostitutes as part of the GDP to maintain the illusion of economic growth.

All this uncertainty pushes people and businesses out the door. No one wants to deal with long-term stability issues when the next debt-ceiling debacle is always just around the corner, and when you have to look out for any number of three-letter agencies to reprimand you for doing business.

Argentina is a sign of things to come. Are you willing to wait for when your government decides that your profits are too high?