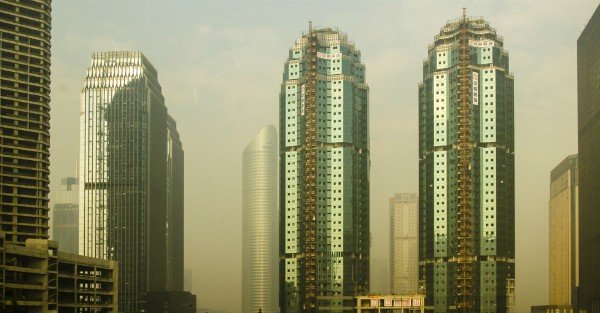 According to the Chinese financial publication Securities Daily, emergency real estate rescue packages have been launched in large cities such as Wuxi, Nanning, Hangzhou, Tianjin, Tongling and Zhengzhou in the last month alone.

“Zhengzhou created a mortgage guarantee policy to win back banks’ confidence” according to the story.

Further, “if a borrower does not fulfill the loan repayment obligations as agreed in the contract, the guarantee institutions will have to repay the housing loans…”

What a surprise– a government guarantee.

The market is imploding and defaults are going through the roof. Property vacancy rates in Zhengzhou are an astounding 23%. So the government is putting taxpayers on the hook.

The article goes on: “A legislative affairs official of Zhengzhou revealed to the media that this was the first time for Zhengzhou to carry out such individual housing loans guarantee policy.”

In other words, the government is panicking.

Home sales in China fell last month by 18%, in no small part due to tightening credit conditions.

Developers have tried to pick up the slack and liquidate inventory by offering no money down deals… their own desperation tactic.

But it’s not working.

Over the May 1-3 holiday weekend, new home sales across China’s 54 largest cities were 47% lower than last year.

The national government in China has all but capitulated, and they’ve turned the reins over to local governments to ‘fix’ the problem.

This has been a long time in the making.

According to data from the US Geological Survey and China’s National Bureau of Statistics that was compiled by the Financial Times, in just two years (2011 and 2012), China produced more cement than the United States produced in the entire 20th century.

So much excess inventory has built up, a major slowdown was inevitable.

This is a huge issue for China given that housing sales comprised nearly 12% of GDP last year.

Even President Xi Jinping recently stated that his nation must adapt to a ‘new normal’ of slower economic growth.

And like the butterfly that flaps its wings, a slowdown in China has substantial effects on the rest of the world.

I’m seeing this first hand here in Chile; Chile is a huge copper producer, and under high growth conditions, China is a top consumer.

As China has slowed, its copper consumption has fallen. Copper prices have tanked.

Over the past few months, the Chilean peso has lost as much as 20% over its average in recent years. And I can see on the ground, all of this has adversely affected the Chilean economy.

But as I’m fond of writing, in every situation, there are winners and losers.

In this case, my team and I are seeing a lot of attractive deals for agricultural property.

What was once a seller’s market just a few months ago is rapidly turning into a buyer’s market as many indebted owners are dumping their properties. Many are in distress.

Yet due to the slowdown, there are fewer buyers in the market with cash in hand, and I’ve even seen several properties go to auction recently.

For foreign investors, this is a great situation to be in. And I expect that as China’s slowdown continues to unfold, we’ll see a lot more of these types of opportunities all around the world.