042: Six ways to take back your freedom 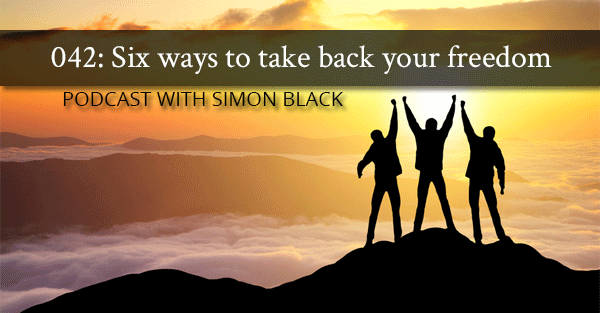 Podcast Episode #42
Six ways to take back your freedom

If you’ve been a reader of Notes from the Field for any time, you’ve probably realized that history is a major passion of mine that routinely finds its way into this missive.

19th century English politician John Dalberg-Acton, who famously remarked “power corrupts, and absolutely power corrupts absolutely,” also wrote once that History is not a burden on the memory but an illumination of the soul.”

It’s not about dates and places and battles… but stories.

History is far better than a soap opera or romance novel. It’s the ultimate reality TV show, following people around their lives and getting an up close view of their conflicts and bad decisions.

We have a lot to learn from these stories. They may not repeat verbatim. But their stories certainly reflect into our own time.

They teach us that ‘this time’ is never different.

Today we’re merely a slightly more evolved version of the roughly 100 billion people who came before us. And we’re susceptible to the same mistakes they made.

Over the past 15 years I’ve taken history a step further into my own personal life and have spent a lot of time tracking down my family history.

My paternal line is originally Norman, the medieval barbarian tribe from northern France.

They came here to Oxford County in southern England at least eight centuries ago, and the first evidence of them in public records dates back to 1250.

I’ve even found old court cases dating back to 1302 in which an ancestor of mine was sued by Italian merchants for the sum of 10 pounds (a huge sum back then).

It’s amazing to think about. In the 14th century, Italy was the dominant superpower in Europe, and England was just a petty kingdom.

Marco Polo was traveling the orient at the time, and the gold florin of Florence was the primary international reserve currency.

Then things changed. Italy declined and Spain rose to prominence. Then France. Then England. Then America.

I’ve traced my family’s history through all of this, through the rise and fall of nations, and to the colonies across the Atlantic in the early 1600s.

And just like people and families which rise and fall, nations, too, have a life cycle.

They’re born. They grow. They peak. They decline. And often they’re born again.

This life cycle is greatly accelerated when governments manipulate the one universal ingredient of prosperity: freedom.

It might sound hokey and cliche, but there is nothing more important in a strong economy than freedom.

How much more wealth would there be if 30% of your income could be reinvested back into the economy instead of squandered on destructive wars and wasteful domestic programs?

How many more jobs would there be if starting a new business wasn’t so fraught with taxes and stupid regulations?

How much greater would the savings rate be if interest rates weren’t constantly being manipulated down to zero?

But the trend in the world, and especially in the developed West, is less freedom. Not more.

And no big surprise, prosperity has declined right along with it.

In the US, average wages are lower than they were even 15 years ago. This is hardly progress.

It’s a vicious cycle, because as prosperity declines and governments become more bankrupt, they curtail freedom even more.

This causes an even greater decline in prosperity and even more government bankruptcy, which causes them to curtail freedom even more.

Fortunately it’s 2015. And through the amazing technology we have available, it’s possible to reduce their power, increase your freedom, and rebuild your prosperity.

The solution is you. The individual. And in today’s podcast I’d like to explore some of the options that are available to you.

Podcast Episode #42
Six ways to take back your freedom