Australia’s Treasurer: Loose monetary policy has made the rich richer 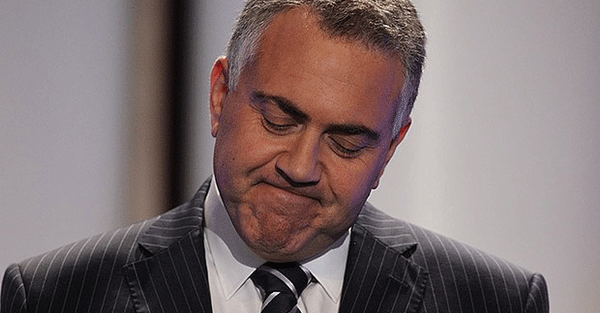 The Treasurer of Australia (equivalent to the Secretary of the Treasury in the US, or Finance Minister in most European countries) has made a stunning admission.

Joe Hockey stated that the policy of ultra-low interest rates hasn’t spurred economic growth; instead it has mainly had one effect—making rich people richer.

“Loose monetary policy has done its work and unfortunately made the rich richer through rising asset values.”

Even those in charge are recognizing and admitting what devastating effects the voodoo magic of money printing and manipulating the price of money has.

Mr. Hockey also admitted that the alternative of ramping up government spending was limited as well because most countries around the world did not have the money or the ability to “put it on the credit card for ever.”

He said the only way to generate growth in the future was by having “a more competitive world with deregulated labor markets,” reduced barriers to trade and budget reform.

At least someone gets it.

Years of ultra-low interest rates by central banks of US, Japan, UK, Europe etc. have pushed bond and stock markets to record levels, even though the underlying economy is still flat.

Those on top are doing great, the middle class is being squeezed out, and the standards of living for average people are decreasing.

People are starting to understand what kind of charade this is.

They realize that the world’s largest debtor cannot be entrusted anymore with the role of the world’s reserve currency.

The whole world is screaming for a change. Even “friends” are looking for a way out of dependency on the US dollar. The French Finance Minister said recently that an alternative to the dollar is urgently needed.

The European Central Bank is now considering holding some of its reserves in Chinese renminbi, while UK just became the first Western country to issue government bonds denominated in renminbi.

The Europeans, the Chinese, the Russians, the Canadians, the Koreans, the Singaporeans… everyone is recognizing what’s going on. And they’re preparing for a new system.

This is happening. Even the establishment is pushing for it.

Of course, nothing happens overnight. Right now we’re seeing an orderly exit from the US dollar based system.

Just as with bankruptcy, this happens gradually, then suddenly.

Bottom line—we have a front row seat to experience this. The solutions are out there for people who recognize the trend. As with most things in life, it’s better to be years early than a moment too late.