BMW cars have outperformed BMW stock by over 600% 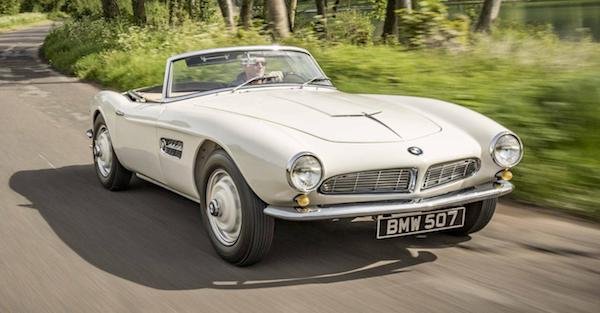 It was a slick convertible and became a hit with celebrities. In 1959, the very first Bond girl from Dr. No – Ursula Andress – took possession of this brand new BMW 507 roadster.

It was re-designed 40 years later into the BMW Z8, which is the car that Pierce Brosnan drove in James Bond, The World is Not Enough.

But the original 1956 model didn’t lose its appeal. Like many high-end cars from the 50s, it became a collector’s item.

Today, the car easily fetches more than $1 million at auction.

The reason behind this surge in value is simple: you can’t go back in time and make more of these cars. There will never be another 1956.

That means these cars will likely keep growing in value as they get more and more rare.

That’s one of the reasons I like collectibles so much. They derive intrinsic value from their scarcity.

And at a time when central banks are busy printing trillions of dollars at every turn to inflate mainstream assets into bubble territory, looking to assets that are inherently valuable makes a great deal of sense to me.

That trend isn’t limited to just cars by the way. There are many types of collectibles that derive immense value from the past.

A great example is fine art. In 2017, a recently discovered painting by Leonardo da Vinci sold for $450 million at auction.

And last week, I told you about 3,000-year-old Egyptian art that was selling for millions of dollars in New York.

That’s a track record of wealth preservation longer than most of recorded human civilization.

That should tell you something about the ability of these assets to preserve wealth in the future.

So as a means to preserve wealth in the long term, it makes sense to consider owning some collectibles instead of having 100% of your net worth in fundamentally flawed paper currencies.

I like collectibles so much that I recently invited our Total Access members – our highest-level of membership – to a full weekend in California dedicated to collectibles and learning about the opportunities available to everyday investors.

It was an impressively educational event. In fact, even I learned a lot– especially about art as an asset class.

And I encourage everyone to learn more about this time-tested wealth preservation strategy.

We also talked about vintage guns, stamps, and even historical documents and books.

And we covered the most straightforward way for beginners to get started with collectibles: numismatic gold coins.

These are gold coins that were minted when the US dollar was still backed by gold, and that carry historical significance.

For example, some were printed in very short supply during a critical time in American history, and are highly sought after by collectors.

Others are simply high-quality, timeless coins.

One such example is the $20 St Gauden, minted from 1907 to 1933. It’s one of the most sought after coins today, and widely considered one of the most beautiful coins ever minted.

A classic 1907 St Gauden in good condition will set you back roughly $1,480 today – the cheapest price it’s traded at in over a decade.

That’s because numismatic coins derive their value not only from the gold content inside but also from the “collector’s premium” they carry that can reach multiple times the value of the gold itself.

For example, in the late nineties, the $20 St Gauden traded at a 300% premium to its gold value. Today, it trades at just 19% above its value in gold.

That’s an incredible bargain. In fact, it’s an all-time low.

But I suspect it won’t stay that way for long. Premiums tend to soar during times of crises. Between May and October 2008 alone, the premium on the coin rose 50%.

And at a time when most assets are in bubble territory, gold is one of the only asset classes that’s gone virtually nowhere over the last five years.

Numismatic coins that are trading at historically low premiums are an incredible opportunity to not only pick up gold at a cheap price, but also to add enormous upside potential through the all-time low premiums. That builds in a solid margin of safety, and great upside.

This is the kind of low-risk, high-reward opportunities that I like. But I also know from experience that mispriced arbitrages like these don’t last forever.

I’m not saying you should go out and dump all your life savings on collectible gold coins. But if you have no exposure to collectibles, the $20 St Gauden might be a cheap and simple way to start building a position.