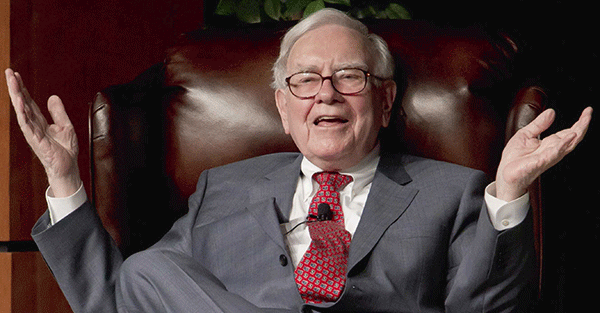 There’s something about being insanely rich that people will believe every word that comes out of your mouth no matter how bizarre.

And no, I’m not talking about Donald Trump. Warren Buffett is an even better example.

As one of the richest men in the world, Buffett’s opinions carry almost Biblical impact, even when they might be completely ridiculous.

Just a few days ago, for instance, he quipped that drinking Coca Cola is better for him than eating broccoli.

He’s also famously expressed contempt for owning gold, suggesting instead that people should simply own a US stock market index fund (like the S&P 500) and hold it for 50 years.

Curiously, though, gold has vastly outperformed both the S&P 500 and Dow Jones Industrial Average over the past half-century.

Even when taking into account the effects of dividends, fund expenses, cash drag, taxes, etc. the evidence still doesn’t support Buffett’s assertion. Yet people believe him.

But perhaps one of Buffett’s most popular opinions is that America is simply awesome and will only get better.

He’s spoken and written extensively in his annual reports that America is the #1 place to be in the world, that the massive opportunity in the Land of the Free will only get better, and that the United States has “never been greater”.

Buffett is right that the United States is an amazing place.

It was founded as a land of opportunity where hard work, risk taking, and a little bit of luck resulted in incredible prosperity.

And some of those elements do still exist.

But Warren Buffett’s outlook on the United States is underpinned by an assumption that the next 50 years will look like the previous 50 years.

That’s clearly not the case.

When Warren Buffett’s company Berkshire Hathaway was rapidly expanding in the 1960s and 1970s, the US government’s debt level was low and the dollar was strong.

Since then there have been MILLIONS of pages of regulations created in the Land of the Free, trillions of dollars worth of debt accumulated, and countless dollars conjured out of thin air.

Buffett is well known for having a very long-term view on things. For him, the typical holding period for owning stocks is ‘forever’.

And that’s a great outlook to have when the fundamentals are in your favor, i.e. if you own shares of a great company with honest, competent management.

But you can’t hold the view that in the long-run everything will always be better.

15 years ago Yahoo, Motorola, and Nokia were three of the top technology companies in the world.

Apple was still years away from launching the iPhone. Few people had heard of Google. And Mark Zuckerberg was still in high school.

But these circumstances changed. Quickly.

Nations and economies also change. History is very clear on this point: wealth and power shift.

Just because a country might be at the top today doesn’t mean it will be that way forever, especially when the nation’s fundamentals and economic headwinds grow worse each year.

So with due respect to Warren Buffet’s investment acumen, there are decades of economic trends, millions of pages of regulations, and thousands of years of human history proving that his outlook on America is wrong.

This matters. It’s important to look at the world with full view of objective data.

And being objective doesn’t mean that you’re pessimistic or negative.

It means that you can make plans and draw rational conclusions based on facts, not based on propaganda or the way we wish things could be.