Capitalism explained in 2015: “You have two cows…” 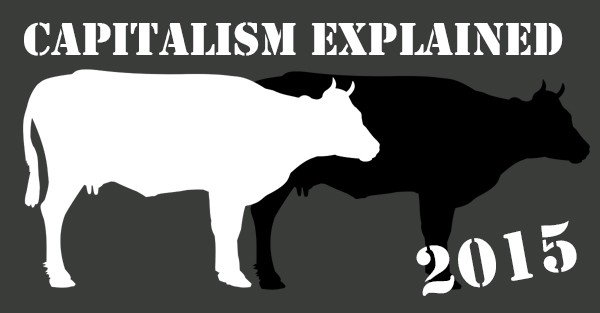 When I was a kid, I used to proudly wear around a T-shirt explaining different economic systems using ‘two cows’ as a metaphor.

Socialism: You have two cows. Give one to your neighbor.

Communism: You have two cows. The government takes both and gives you some milk.

Fascism: You have two cows. The government takes both and shoots you.

I started thinking about this last week when I was in Caracas, because it turns out that Venezuela is a real life example of the two cows metaphor.

It started back in 2001 when the then-President of Venezuela, Hugo Chavez, introduced a law that called for the redistribution of land.

According to their ‘Bolivarian socialism’ pipedream, it was immoral for any single person or company to own too much land. So the government started confiscating people’s private property.

And any property owner who resisted was imprisoned. It makes for the perfect entry on that T-shirt I used to wear:

Venezuela: You have two cows. The government steals your land and imprisons you.

Needless to say, the law had an enormous impact on the Venezuelan cattle industry.

Cattle obviously require a lot of land; and running a profitable cattle operation often means having thousands of acres or more.

They went from being entirely self-sufficient in terms of beef production in 1998, to, within a few years, becoming the second largest beef importer in the world.

Of course, now they have an even bigger problem.

Venezuela’s currency is in freefall, and foreign reserves are dwindling.

So not only has beef production collapsed, but now the country can no longer afford to import beef either.

Beef imports to Venezuela are down over 80% this year compared with 2014.

And what little beef does enter the country is subject to the government’s severe price controls.

This has caused massive shortages and empty grocery store shelves– textbook consequences that any high school economics student could predict.

It’s achieved through freedom. By giving people the opportunity to work hard and take risks. And letting the market determine prices and the allocation of resources.

That’s supposed to be what capitalism is. In fact, that was the last entry on the T-shirt:

Capitalism: You have two cows. Sell one and buy a bull.

Sadly this is no longer the case.

Certainly the West is in much better shape than Venezuela. But the vast regulatory apparatus being built in the so-called ‘free world’ is simply appalling.

Here in the Land of the Free, the federal government alone issues or proposes over 80,000 pages per year of new laws, rules, and regulations.

This means that, right now as you read these words, you are likely in violation of a dozen different regulations that you’ve never heard of, each of which can carry severe criminal, civil, financial, and administrative penalties.

Children get chased away from running lemonade stands. Teenagers get turned in to Homeland Security for going door-to-door offering to shovel their neighbors’ snow.

Businesses must suffer a constant onslaught of new regulations, licenses, permits, and taxes.

Meanwhile the government continues to expand its debts at an astonishing rate, saddling future generations with the obligation to pay a bill they never signed up for.

And the entire financial system is manipulated by an unelected committee of central bankers who fix the price of money (i.e. interest rates) as foolishly as the Venezuelan government fixes beef prices.

This is not the path to prosperity either. In fact, if I were to update the T-shirt for today, I would include these entries:

US government: You have 330 million cows. You milk them down to the last drop, tell them that they’re the freest cows in the world, then train them to be afraid of men in caves.

Federal Reserve: You have two cows. You give them to the banks for free. The banks slaughter them and eat all the meat. You conjure money out of thin air and buy them two more cows.

Wall Street: You don’t actually have any cows. But you rake in billions from selling out your own customers and illegally manipulating the price of milk. The government gives you a slap on the wrist.

Silicon Valley: You have two cows. They don’t produce any milk, and your operation loses $500 million per year. Top VC firms invest in your cows, valuing your company at $25 billion.

US small business: You have two cows. You cannot sell the milk without a permit. You cannot drink the raw milk that comes from your own cows. The government fines you $10,000 for failing to file form BS-01519.

US big business: You have two cows. You hire the former head of the FDA to be your corporate ‘advisor’. You get a huge government contract. Now you have two million cows.

How about you– any ideas?