Congratulations, we just got another 5 years of the US dollar 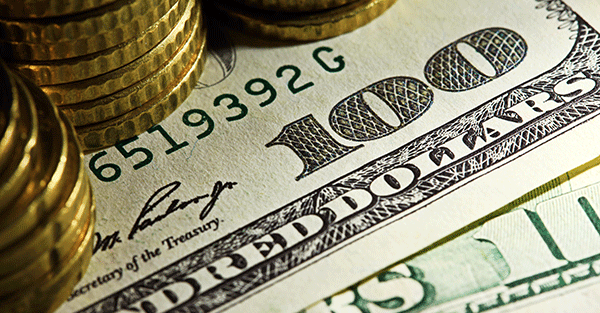 It’s eerily befitting that at this very second, all of South China is frantically anticipating a major storm bearing down on the region.

In this part of the world they call them typhoons, which comes from the Chinese ‘tai fung’, meaning ‘strong wind’.

And strong they are. Here on the 33rd floor of my hotel in Kowloon right now, I can hear the wind whipping ominously as if it’s about to blow right through the windowpane.

Just across the border in Shenzhen, there’s an even stronger wind, blowing trillions of dollars of wealth right out of the system.

And more than that, it’s blowing away confidence.

Financial systems are based on confidence. Think about it– these governments and central banks have absolutely nothing tangible to offer.

They print up countless pieces of colored paper backed by nothing of value and pass it all off as ‘money’.

They rack up trillions worth of debt and act like it’s inconsequential.

Banks operate by keeping only a tiny fraction of their customers’ funds on reserve, loaning out the rest for wars, ghost cities, and bridges to nowhere.

These shaky nodes make up a perilously fragile financial system that is just barely held together by a very thin veneer of confidence.

Think about what happened in 2008: suddenly the market lost confidence in the solvency of some of the biggest banks on Wall Street, and overnight the entire financial system was in crisis.

Confidence is everything. And China just lost it.

For years the Chinese government has been trying to build a reputation as a credible financial leader in order to compete with the West.

The West dominates global banking transactions with the SWIFT system; but China is now launching the CIPS system to compete.

The West dominates supranational finance with the IMF and World Bank; but China has launched the Asia Infrastructure Investment Bank to compete.

The US dollar and euro dominate global reserves and international trade; but China has quickly loosened controls, established renminbi financial centers around the world, and entered into numerous swap agreements to compete.

It’s working. Or at least it was. Confidence in China has been building, most clearly evidenced by the meteoric rise of renminbi activity.

Even five years ago, the renminbi didn’t even register in international data tracking.

Yet its usage now has exploded, to the point that the renminbi is now the 5th most widely used currency in global payments, ahead of the Canadian dollar and Swiss franc.

But now they’ve gone and screwed it all up.

The absurd bubbles in China’s stock markets have burst. But rather than let the market take its natural course, the Chinese government has stepped in to ‘manage’ the crisis with the most mystifying, baffling steps imaginable.

Then they actively prompted small investors to dive headfirst into the marketplace, even suggesting that people offer up their homes as collateral to buy stocks on margin.

Now they’ve resorted to halting trades– half of Chinese stocks are now suspended. You can’t buy them. Or sell.

In fact they’re banning large buyers from selling. And they’re even threatening to jail short-selling investors who profit from stocks declining.

These measures won’t work. Every bubble eventually bursts, and there’s nothing they can do to prevent it.

More importantly, though, China has singlehandedly destroyed much of the credibility they spent years building.

Just when people were starting to get over the credibility hump, the Chinese government went and did all these ridiculous things. Now everyone’s back to thinking, “Same old China…”

The trust is gone.

We can absolutely expect a lot of the wind to be taken out of the renminbi sails, slowing its rise to challenge the dollar as the dominant reserve currency.

Undoubtedly China’s long-term future is very bright. But this is a major setback. It’s not that the market is crashing– it’s how the government is responding.

Later this year the IMF is supposed to decide whether or not to include the renminbi in their ‘SDR’ pseudo-currency basket.

This is something that would be a major step in re-aligning global finance. And it’s a big deal because the vote only comes once every five years.

Until now, the IMF was practically backed into a corner. They had no choice but to let China into the club.

But now they have all the ammunition they need to deny China, yet again, for another five years.

They can point to this incident and say, “Due to the unstable nature of China’s capital markets and regulatory environment, we will not include the renminbi at this time.”

And that, ladies and gentlemen, keeps the US dollar in the driver’s seat for the next five years.

Let’s put it another way: the currency issued by one of the most pitifully capitalized central banks in the world, backed by the greatest debtor that has ever existed in human history, will dominate the world for another five years.

This practically gives Uncle Sam carte blanche to spend the next five years completely unchecked by competition, going even deeper into debt and making their problems even worse.

The bubble in China may be bursting. But the bubble in America is about to get even bigger.