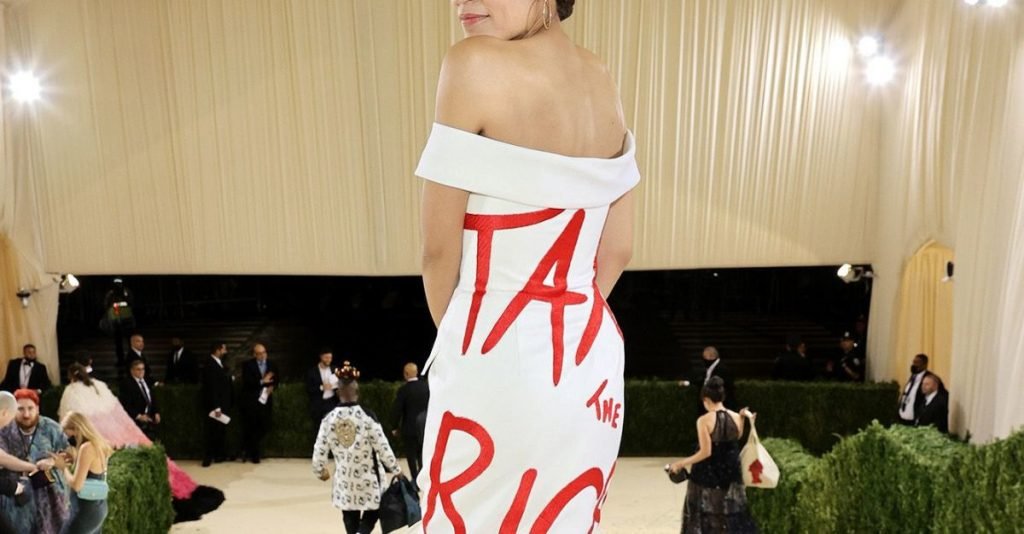 Mayor of San Francisco Breaks Her Own Mask Policies

The mayor of San Francisco, London Breed, currently forces everyone in the city to wear masks in indoor public spaces and businesses, even if they are vaccinated.

But last weekend, she was caught on video partying without a mask at a tightly packed indoor nightclub hosting a concert.

But this COVID hypocrite had plenty of excuses— she said she was “feeling the spirit” and not “thinking about a mask.”

Breed said it was ridiculous for fully vaccinated people to have to wear masks… even though that is the rule her city government enforces.

She concluded, “We don’t need the fun police to come in and try to micromanage us and tell us what we should or shouldn’t be doing.”

What exactly has she been doing for the past 18 months?

Click here for hypocrisy and here for the excuses.

Last week Rep. Alexandria Ocasio-Cortez wore a dress emblazoned with “Tax the Rich” to the $35,000 per ticket MET Gala.

The designer of her dress is Aurora James, who sells overpriced dresses to celebrities. The design company owned by James owes almost $180,000 worth of taxes.

For failure to remit payroll taxes, the company owes New York state almost $15,000 and the federal government over $100,000. It also owes $62,000 in Worker’s Compensation to New York state.

Those debts were incurred before the pandemic. But during the pandemic, Aurora James’ company took over $41,000 in pandemic relief aid.

Josh Thompson said in the video that “following directions” and “sitting quietly… come from white culture.”

You’ll be shocked to learn that Thompson includes his pronouns in his social media profile, and believes that “Teaching is political.”

According to a CDC report, kids became way fatter during the pandemic.

“Among a cohort of 432,302 persons aged 2–19 years, the rate of body mass index (BMI) increase approximately doubled during the pandemic compared to a prepandemic period. Persons with prepandemic overweight or obesity and younger school-aged children experienced the largest increases.”

This means the rate at which children gained weight doubled during the pandemic.

According to the CDC, 544 children aged 0-18 have died from COVID-19 across the US during the entire pandemic.

Also according to the CDC, obese children were over three times more likely to be hospitalized with COVID, compared to children of a healthy weight.

Meanwhile, up to 325,000 people in the US die each year from disease caused by obesity (not including COVID, from which the obese are at a much higher risk of dying).

But let’s keep pretending that the lockdowns and restrictions on children are saving lives.

The good citizens of the town of Orocovis, located in the central highlands of Puerto Rico, gathered earlier this week to celebrate the 4th birthday of a massive sinkhole in Highway 772.

They went as far as to bake a cake and set up a table with refreshments… and even sing “Happy Birthday” to the sinkhole.

Obviously the whole affair was a humorous effort to call attention to a big problem for residents that has gone completely unanswered by local government officials for the past several years.

Organizers told local media that they have tried working with the government to reach a solution on several occasions, but their pleas are ignored.

But their joke birthday party seems to have worked; the media coverage of this story has shamed the local politicians into finally doing something about it, and they claim the whole will be fixed in the next three months.