Detroit police murder a family’s dogs in their own home 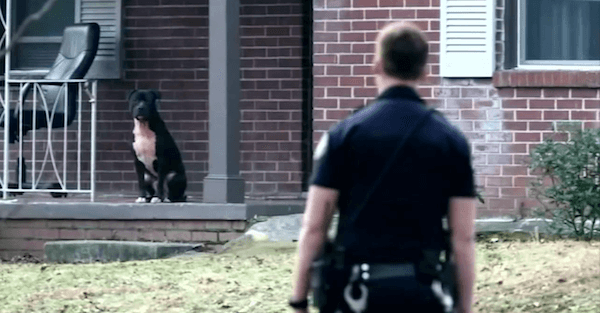 This one is pretty disturbing.

In January 2016, Detroit police were tipped off that someone was selling small quantities of marijuana out of their home.

Given that the City of Detroit’s murder rate exceeds that of Mexico, you’d think that the Police Department would have had bigger fish to fry.

Apparently they didn’t. So the cops obtained a search warrant and went over to the house.

They knocked, waited a moment, then busted down the door, where they found the resident Nikita Smith had just put two of her dogs in the basement, and was enclosing a third one in the bathroom, before going to open the door.

One of the dogs got out of the basement and returned to her owner, Ms. Smith.

The cops claim the “vicious” beast was “charging.” So they unloaded with a shotgun blast to the animal’s head, plus seven more rounds from another officer’s handgun.

But the blood lust didn’t end there.

The officers knew that there were two more dogs in the home– one in the basement, one in the bathroom. Both were restrained, as was Ms. Smith.

The cops could have called animal control. They could have done a dozen other things.

Instead, Detroit Police officers went into the bathroom and killed the second dog… then down to the basement where they killed the third dog.

Finally, with all three dogs executed and the home’s resident in custody, police conducted a full search of the home… finding a big fat ONE OUNCE of marijuana, barely enough to qualify as a misdemeanor.

Then the cops called animal control to clean up the dead dogs’ bodies.

The charges against Ms. Smith were ultimately dismissed because the cops didn’t even bother to show up for the court hearing.

And an internal police investigation found that shooting the dogs was justified.

All said and done, the cops simply entered a woman’s home, and went room by room killing her pets, charged her with a petty misdemeanor, and then didn’t even bother to see through this ridiculous insult to justice.

Most people consider their pets members of the family. But under law, they are property.

That’s what adds insult to injury. There is no recourse for murdered pets, it is simply unlawful destruction of property.

So Smith sued the officers for unconstitutionally destroying her property, in violation of the Fourth Amendment right against unreasonable search and seizure.

But the courts dismissed the suit. You see, Smith had committed another crime. She failed to get the dogs licensed.

The dogs weren’t family members. They weren’t even property. They were contraband, according to the court, and Smith had no legal right to them because they weren’t registered.

Smith is trying again– she filed an appeal earlier this month in the US Court of Appeals, hoping to be able to hold the Detroit Police Department accountable for its actions.

This whole situation is pretty revolting.

Police can kick down your door because a neighbor gives them some phony tip or claims to have witnessed a completely trivial, victimless ‘crime’.

They can execute your pets like Nazi war criminals without even a slap on the wrist.

And when you try to seek damages, you get snubbed by the courts for failing to follow some ridiculous bureaucratic procedure.

Does this whole charade make the public any safer? I’d worry who would be the next victim of these trigger-happy police… or these completely abusive rules… not the person selling cannabis (which by the way has already been partially decriminalized in Michigan.)

At the very least it’s a total waste of resources for such a trivial crime, especially in a cash-strapped, bankrupt city like Detroit.