Entrepreneurs and investors: Three ways to make a pile of money in Burma (Myanmar) 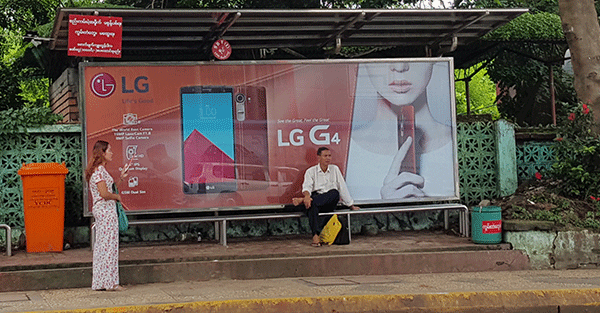 Have you ever walked into a restaurant and seen a table full of people staring at their phones instead of talking to the real live human beings across from them?

That used to never happen in Yangon… simply because no one had mobile phones.

It was actually pretty nice being able to talk to people without being interrupted by some infernal device.

But now the Burmese are catching up with the rest of the world.

Mobile infrastructure is still comparatively underdeveloped here. But the city has gone from basically zero coverage to ubiquitous 3G in about 18 months.

After opening up to the world in 2013, the ‘kindler, gentler’ national government awarded licenses to two foreign companies to build and operate a mobile network.

Even just 2-3 years ago a SIM chip cost thousands of dollars. Now you can buy one for a few bucks.

And with a flood of cheap smart phones from China, mobile is becoming a must-have.

Millions of people are now on mobile, many of whom are accessing the Internet for the first time ever. And it’s really changing things.

I’ve been amazed at how different this place has become just since my last visit a year ago; hardly anyone is without a mobile device.

But it’s more than that. There are more businesses. More vehicles. More trade. More production. And more prosperity.

Their new ability to communicate, access information, and do business is having a profound effect on the economy, and it’s really exciting to see.

Decades ago Burma was the richest country in Southeast Asia.

In fact, in the early 1900s, Yangon (known as Rangoon back then) was more cosmopolitan and developed than most of the United States.

Then the military government took over and ruined everything. By the 1970s, Burma had become the poorest country in the region.

This highlights a very clear lesson from history: where there is freedom, there is prosperity. Where there is tyranny and corruption, there is hardship.

It’s not a complicated formula. If people have peace and freedom, they will thrive.

Sprinkle in a dash of technological advancement and an economy will grow like the magic beanstalk.

Burma is starting to get all three of these factors.

The massive impact of technology being imported into the country cannot be understated; it’s as if the rest of the world just handed a cigarette lighter to a cave man.

Additionally, though this is still a tightly controlled society, Burma is starting to get its first taste of economic freedom.

Businesses are now able to export to global markets that they’ve never had access to before. Jobs are becoming more plentiful. Domestic consumption is growing.

And after years of isolation, consumers are getting their first taste of imported products.

Their taste is insatiable; it’s as if decades of pent-up demand is exploding in a gigantic supernova of consumption.

Most people had never even tried Coca Cola before 2013; now thirsty consumers are gobbling it up like crazy.

This is going to be a major driver of economic growth for several decades.

Samsung, Huawei, and LG are already raking it in. But for small investors and entrepreneurs trying to figure out how to invest in Burma (Myanmar), there are three primary ways to capitalize on this rapidly growing market:

This is an old staple; anytime a country emerges from isolation, war, or has a resource boom, you can expect a flood of expats to come rushing into the country.

This has happened time and time again in places like Iraq, Libya, Angola, etc.

Often the expats are from NGOs and big oil companies, and they are typically accustomed to a standard of living that doesn’t currently exist in the country.

Real estate is a simple example (though there are many others).

Most of the apartments available in Yangon are in poor condition, far below the international quality that expats demand.

So it’s possible to build a very lucrative business from customizing and improving apartments to international standards.

2) Selling local products to the world at international prices

Burma has some obvious cost advantages. Salaries here are rising, but they’re still incredibly low, even when compared across the region.

Ironically this place is crawling with Chinese entrepreneurs looking to set up factories; Burmese manufacturing costs are far lower than in China.

The resource sector is another prominent example; mining gold here means you can sell at the global market rate, but pay much lower Burmese extraction costs.

It’s the same thing with agriculture as well– paying lower local costs but exporting at global market prices. (This is similar to what we’re doing in Chile.)

Last but not least are businesses that sell foreign products to the rapidly growing market of local consumers.

This is what Samsung, LG, etc. are doing. But mobile phones just scratch the surface.

Think about the intrepid foreigners who brought American blue jeans to Russia after the fall of Communism. They sold like hotcakes.

There’s hardly anything available for sale here (McDonalds doesn’t even have a presence in the country).

This makes it a great opportunity to acquire master distribution rights, i.e. become the exclusive distributor of certain foreign products in Burma.

I once did business with a Russian oligarch, for example, who obtained the master distribution rights for high-end European chocolates.

This gave him the exclusive right to sell an incredibly popular product to a rapidly growing consumer market.

He was broke when he negotiated the deal, but made a vast fortune off of it.

There are no shortcuts; you’ve got to be here, or at least spend some serious time on the ground.

(After all, if it were easy to invest in Myanmar, there wouldn’t be any fortunes to be made!)

But for those who do, this is one of the most exciting markets in the world.