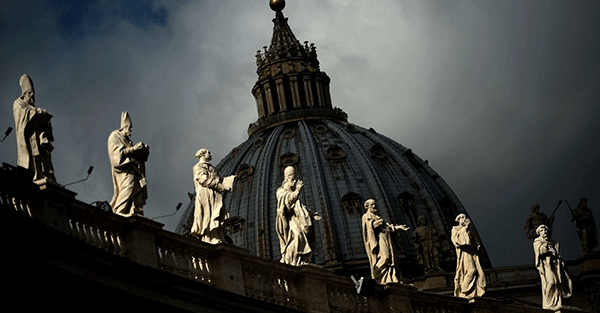 OK this is really getting ridiculous.

Despite being the sacred keepers of the Catholic faith and trustees of the meek, the Holy See has just inked a deal with the US government putting the Pope in bed with the Internal Revenue Service.

It’s so bizarre you couldn’t possibly make this stuff up anymore.

The Vatican City has been forced into sharing information with the US.

So now, like a good little doggy, they’re obliged to cough up financial records on anyone they’ve ever had dealings with whenever Mr. Obama snaps his fingers.

I’m not sure this is what Pope Francis had in mind when he called for an end of “the cult of money and the dictatorship of an economy”.

And this is true in almost all cases. Except, apparently, when it pertains to the US government.

Despite having borrowed more money than any nation in the history of the world, the US government still acts like everyone’s master, including dictating the most ridiculous terms on financial agreements like this.

We’ve talked about this before– FATCA may prove to be the greatest disaster in US history. And there’s one simple reason why.

Ever since the end of World War II, the US banking system has formed the backbone of global banking and finance.

Right now, if a South African refiner buys oil from a Brazilian producer, that transaction will likely be settled in US dollars and clear through the US banking system.

In other words, the money will flow from South Africa to New York, and from New York to Brazil.

For over 70 years now, the rest of the world has trusted that the US government would continue to allow free and unfettered access to a sound, safe, stable banking system.

And… one would think that the US government would respect this tremendous responsibility of overseeing the world’s core banking system. Yes. One would think.

But that hasn’t happened at all.

In 2008 after Lehman Brothers failed, suddenly the world got a dose of reality.

After an epic financial disaster which brought down some of the largest banks in the United States, suddenly the world realized that the US banking system wasn’t so safe after all.

One bank after another failed. Several had to be nationalized. Nearly all of them had to be bailed out.

Fool me once, shame on you.

Then in 2010, the US government passed FATCA… which mandated that every bank on the planet jump into bed with the IRS.

They further threatened that any bank which did not comply would be kicked out of the US banking system… essentially choking off a foreign banks’ ability to conduct international business.

Fool me twice, shame on me.

Then last year the US government went after French bank BNP Paribas, fining them a whopping $9 BILLION for doing business with countries like Iran and Cuba (though the latter is now curiously America’s BFF.)

And naturally, if BNP didn’t pay up, the US government threatened to kick them out of the US banking system. Notice a pattern?

Fool me thrice. OK how many f**king times does the world need to be fooled before they do something about it?

Too many times, apparently. But it’s finally starting to change.

The world has realized that the US government has a track record of reckless irresponsibility.

They’ve proven to the world that they’re willing to take the sacred international banking obligation that they’ve been entrusted with and turn it into a weapon of intimidation.

This is unbelievably stupid.

The US government is taking a giant, steaming dump on its last remaining competitive advantage.

Having control over the global financial system is for all intents and purposes a license to print money.

It meant that the US could create as much money as it wanted, indebt itself as much as it wanted, because there would always be strong foreign demand for dollars.

But you can only bully the rest of the world so many times before foreigners start looking for alternatives.

And that is happening.

The new China International Payment System (CIPS) will be the first credible option in conventional banking to circumvent the US. And it’s coming online later this year.

Not only is CIPS not dependent on the US dollar or the US banking system, but it also fixes a number of technological inefficiencies with the current system.

Over the long-term, the end result will be fewer banks using the US system, resulting in a substantial decline in their use of US dollars and their ownership of US government debt.

Think about it like this– foreigners currently own a third of US government debt.

If they no longer have as strong an incentive to own US dollars and start reducing their load, who’s going to pick up the slack?

Who will the US government turn to when they need to borrow money?

Whether you want to or not, the US government will find the most creative ways possible to ensure that you invest your money in the ‘safety and security’ of government bonds.

Welcome to the coming capital controls.